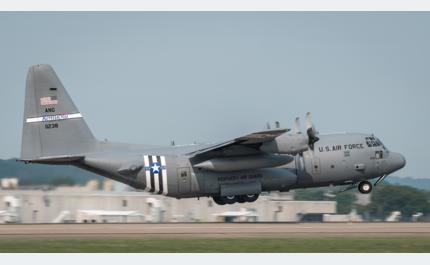 Only four Air National Guard units in the entire country were chosen by the U.S. Air Force in a competitive stationing process.

The 123rd Airlift Wing, based in Louisville, is among the most highly-decorated ANG units in the nation having received 18 Air Force Outstanding Unit Awards. The Kentucky Congressional Delegation contacted Secretary of the Air Force Barbara Barrett on multiple occasions in support of the unit’s selection, touting its premier abilities and strategic location.

“Kentucky is grateful to the 123rd Airlift Wing and the 8,000 soldiers and airmen of our Commonwealth’s National Guard for their dedication to protecting our communities and our country. As Senate Majority Leader, it was a privilege to help bring these aircraft to the Bluegrass State,” said Senator McConnell. “For several years, my colleagues in the delegation and I have supported the necessary federal funding for these planes and highlighted Kentucky’s critical role in defending our country. Secretary Barrett made an excellent choice for the new C-130J aircraft, and I look forward to the 123rd Airlift Wing’s continued excellence at home and abroad.”

The Kentucky ANG’s current squadron of eight C-130H aircraft is rapidly aging and in need of recapitalization. The new C-130J aircraft offers improved capabilities to fulfill the ANG’s missions domestically and abroad. In particular, the new model will provide the Kentucky ANG a 25% greater immediate response capability when executing its emergency and disaster response missions. Stationing the C-130J aircraft in Louisville is not only a cost-effective basing decision, but will also maximize the value of its increased capacities.

“This new platform will give increased capability, allowing Kentucky’s airmen to remain a viable force and continue providing theater airlift support around the globe. I am incredibly proud of the women and men of KYANG, and I am honored to have helped secure this aircraft for the Commonwealth,” said Senator Paul.

“The Kentucky National Guard is a critical component of our state and our nation, with highly trained men and women who are always prepared to respond to emergencies here at home and overseas. It has been an honor to work alongside Senator McConnell and our state delegation to ensure that the Kentucky Air National Guard remains at the top of the priority list for the new state-of-the-art Lockheed Martin C-130J Super Hercules aircraft,” said Congressman Rogers, Dean of the Kentucky Delegation. “As a senior member and former Chairman of the House Appropriations Committee, I started working to secure federal funding for these essential military transport aircraft several years ago, knowing the need that existed within the National Guard—both in Kentucky and around the country. I’m pleased that we are one step closer to bringing these incredible jets to Kentucky to support the brave troops we have in the Commonwealth.”

“It is my honor to represent the men and women of the Kentucky Air National Guard’s 123rd Airlift Wing in Congress, and I am thrilled that the federal funding we’ve been able to secure will make Louisville home to the C-130J,” said Congressman Yarmuth. “This talented wing has never hesitated in answering our nation’s call, and that dedication to service has made them one of the most decorated units in the United States Air Force. The basing process was highly competitive and, once again, the 123rd Airlift Wing got the job done. I thank Secretary of the Air Force Barbara Barrett for maintaining an open line of communication with our delegation as we pushed for this, and I congratulate the Kentucky Air National Guard on this tremendous news.”

“The Kentucky Air National Guard provides indispensable protection for our country and the Commonwealth. I am pleased that the 123rd Airlift Wing will receive the latest in aviation equipment to ensure they can accomplish any mission they are given,” said Congressman Guthrie. “I would like to thank Leader McConnell as well as my fellow Kentucky colleagues in Congress for their efforts to ensure our men and woman in uniform have the best equipment. The service members of Kentucky’s ANG serve with distinction and honor. I am very thankful for their sacrifice and dedication to our nation.”

Congressman Massie said, “Louisville’s 123rd Airlift Wing is one of the most respected units in the nation. The Air Force’s decision to deploy a new C-130J squadron to them means the men and women of the 123rd Airlift Wing will have the state-of-the-art equipment needed to fulfill their vital mission. I thank Secretary Barrett for recognizing the significant role Kentucky plays in defending our nation by selecting the 123rd Airlift Wing as one of only four recipients of these new aircraft.”

“I am thankful every day to the citizen soldiers and airmen who serve in the Kentucky National Guard and the 123rd Airlift Wing, one of the nation’s most decorated units. This new squadron of eight C-130J aircraft will support the Air Guard’s critical airlift mission here at home and abroad, and will replace the aging fleet of C-130H models,” said Congressman Barr. “I have been proud to work with my colleagues in the Kentucky Congressional delegation throughout the appropriations process in the past several Congresses to fund these aircraft. Building on this effort, I have also advocated directly to Air Force Secretary Barbara Barrett, former Chief of the National Guard Bureau General Joseph Lengyel, and other Air Force and National Guard leadership to help secure this favorable basing decision for Kentucky. I am grateful to Secretary Barrett for choosing the Kentucky Air National Guard to receive these aircraft.”

“The patriots who make up the Kentucky Air National Guard deserve quality, modernized aircraft to be able to respond quickly to emergency situations. This new aircraft fleet is tremendous news for Kentucky, and I want to thank the men and women of the 123rd Airlift Wing for their dedication and service to our nation,” said Congressman Comer.

Governor Beshear said, “The Kentucky National Guard has protected this country for generations, and are now protecting us during this pandemic. With the U.S. Air Force only selecting four Air National Guard units in the entire country during this competitive process, their selection of Kentucky demonstrates the commonwealth’s commitment to our military and military families, the capability of our service members and our ability to move forward and create a better commonwealth for all Kentuckians as we emerge from this pandemic.”

From the office of U.S. Sen. Majority Leader Mitch McConnell