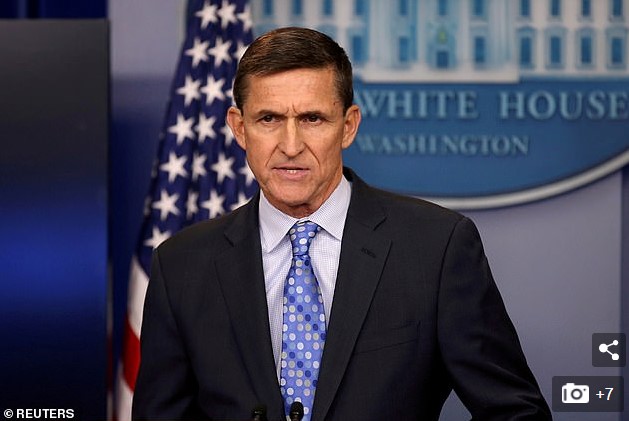 *Michael Flynn, 61, said he ‘put the fear of God into Barack Obama and still does’

*As a result, Obama warned Trump not to hire him – but he did so anyway

Former national security advisor General Mike Flynn has claimed former President Barack Obama was ‘scared of him’ and was one of the reasons why Obama warned Donald Trump not to hire him in 2016.

Flynn took direct aim at Obama, who reportedly warned Trump about him during a 90-minute conversation after the 2016 election Politico states.

Speaking on Fox News to Jeanine Pirro on Saturday night, in his first television interviews since receiving a presidential pardon from President Trump, Flynn, 61, would not reveal what it was exactly Obama warned Trump about.

According to the report, Obama and other officials believed Flynn was ‘problematic’ and had concerns regarding his management of the Defense Intelligence Agency.

‘I must have put the fear of God into Barack Obama and still do because of this long four-year saga they put me through, and frankly the entire country. One of these days I will lay it out. But it’s pretty amazing for the transition in the United States of America from one president to another,’ Flynn said.

When pushed by Pirro over exactly what it was Obama wanted to keep secret, Flynn suggested that the Obama administration had been spying on the Trump campaign during the run-up to the 2016 election and may well have wanted to continue to do so during his time in office.

‘When he chose me to be the national security advisor they knew that their little plan of spying on Donald Trump would fall apart and many other foreign policy blunders they got our country into, whether it was the Iran deal, issues going on in the Asian-pacific theater, trade, all sorts of issues that were in play that the last administration did to frankly run this country right into the ground,’ Flynn said.

‘They knew those were the types of things I was aware of. Let’s face it. Barack Obama appointed me twice. I was Senate confirmed twice during the time I was in the military. So it’s amazing that would be what he would focus on during the transition for the United States of America. It’s outrageous, actually.’

The conversation quickly moved on to Sydney Powell, the conspiracy theory pushing lawyer who formerly represented Donald Trump’s legal challenge to the 2020 election results before being fired by the campaign.

Pirro asked Flynn flatly, ‘Do you think she is onto something?’

‘Yes, absolutely,’ came Flynn’s direct reply. ‘I call Sidney Powell America’s guardian angel of justice. Sidney Powell’s clients are the people of the United States of America. That’s who she is fighting for right now,’ Flynn said as he lavished praise on her.

Powell has pushed numerous conspiracy theories without evidence that massive voter fraud occurred and that Mr Trump is the winner of the 2020 election.

‘She has her teeth into Georgia, Arizona, Michigan, Wisconsin and the stuff that she has laid out in her various filings, it’s going to play out here.

‘As the president just said tonight, he mentioned some of the issues that we know are just a complete disaster and embarrassment for our country in this latest fraudulent election where there was in fact massive fraud. It’s just incredible,’ Flynn continued.

Flynn finished his appearance on Saturday night’s show by calling on state governors to challenge the current election standing.

‘We have to stop all engines right now. All these governors and quote-unquote leaders of the their states, they have to take responsibility and do something to stop what they are doing.

‘Do not certify these elections and go back and do a far more detailed technical mail ballot and signature audit instead of just saying to the American people, hey, nothing to see here. We are just going to continue to move on to an inauguration. That’s not what the American people want and they won’t stand for it.

Flynn’s remark about the inauguration comes after he suggested Trump suspend the Constitution.

Flynn blasted out an advertisement that the group We the People Convention printed in the Washington Times.

It urges Trump, who has called the election ‘rigged,’ to declare a ‘limited form of martial law’ and have the military – who reports to him directly as commander in chief – conduct the revote.

Trump himself has repeatedly refused to commit to a peaceful transfer of power, although he told reporters in a combative session last weekend he would leave the White House if the Electoral College certifies the election for Joe Biden.

Trump’s pardon appeared to put an end to Flynn’s drawn-out court proceedings, in which his legal team attempted to convince District Court Judge Emmet Sullivan to drop its prosecution against him at the Justice Department’s request.

Powell, who also represents Flynn as his attorney, had previously asked Trump not to pardon her client amid her efforts to get the case dismissed.

Federal prosecutors also at first sought leniency, but ultimately sought up to six months in jail time after Flynn asserted prosecutorial misconduct and later sought to reverse his plea.