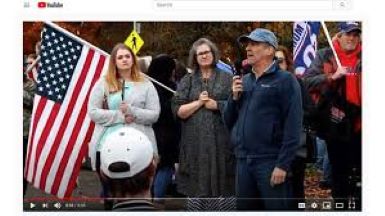 The Oregon Medical Board suspended the license of Dr. Steven LaTulippe who said he refused to wear a mask in his clinic and encouraged others to do the same.

LaTulippe announced at a pro-Trump rally on Nov. 7 that he and his staff skipped masking and denoted the coronavirus pandemic — which has infected over 14.5 million Americans and killed more than 281,000 in the U.S. – as a “common cold.”

“I want to expose what I call corona mania,” LaTulippe said in a video posted to YouTube by the Multnomah County Republican Party.

“I and my staff, none of us, not once, wore a mask in my clinic,” LaTulippe said. “Take off the mask of shame.”

The board’s website reportedly said it made the decision based on “the board’s concern for the safety and welfare of licensee’s current and future patients.”

The board also found that LaTulippe told patients seeking his guidance in July not to get tested if they were asymptomatic, and that wearing a mask is ineffective – contrary to what the Centers for Disease Control and Prevention (CDC) advise, reported NBC News.

The CDC recommends wearing a mask to prevent the spread of the disease. A Nov. 20 report showed that evidence collected in seven different studies “confirmed the benefit of universal masking in community level analyses.”

LaTulippe told NBC News in an interview following his rally appearance that if he saw a patient worried about COVID-19, they could go to a separate room that was sanitized, before and after they left.

“I’m very interested in sound medical practice, and I’m interested in good science,” he told the publication. “And when science and medicine become perverted with corrupt politics, then I’m up for a fight, and that’s what made me go to that rally and say what I said.

In this article:Coronavirus, Oregon, Oregon doctor who refused to wear a mask, Oregon Medical Board, Steven LaTulippe