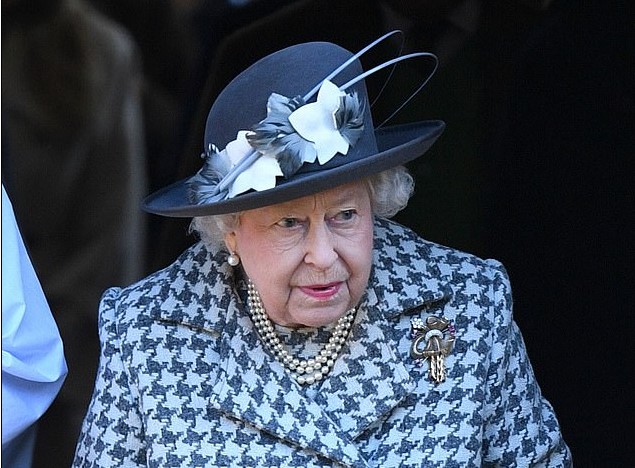 *Patricia Earl, 56, has served the Queen for 32-years and has mysteriously quit

*While she has not commented, the departure follows a revolt from royal staff

The Queen’s head housekeeper at Sandringham has mysteriously quit her job after 32 years working with the monarch.

Patricia Earl, 56, who lives close to the royal estate in the Norfolk village of Dersingham, has left her position, following a staff revolt earlier this year which saw workers rebel against plans to isolate them from loved ones for a month.

According to The Sun Online, the housekeeper was ’embarrassed’ after Royal Household staff refused a plan for them to stay in the royal’s Covid-19 bubble at Sandringham over Christmas.

The housekeeper was a well-respected royal member of staff, and in 2018 Patricia was presented with the Royal Victorian Medal.

First established by Queen Victoria in 1896, the Royal Victorian Order is chosen at the Queen’s discretion, and is often awarded to those who have served the monarch or the royal family with dedication.

Patricia did not want to comment on her departure, while a Buckingham Palace spokesman told The Sun Online yesterday: ‘This was a completely amicable departure.’

A team of about 20 employees had been asked to remain on the monarch’s Norfolk estate without their families to support her, Prince Philip and other members of the Royal Family during the festive period.

But the group – said to involve cleaners, laundry and maintenance workers – are believed to have mutinied because they are unwilling to isolate from loved ones for four weeks.

Staff were being asked to stay for the month-long period so they could remain in a Covid bubble to protect the 94-year-old monarch.

The Queen typically spends her winter break at Sandringham, travelling up after the Christmas party for extended family members at Buckingham Palace in December.

But the uprising means the Queen and Prince Philip will spend Christmas at Windsor Castle for the first time in 33 years.

It was announced earlier this week that this year they will forgo the festivities and remain at Windsor, where they have been isolating with a ‘bubble’ of staff since October.

It is understood the Queen and the Duke of Edinburgh will not take advantage of the relaxed Covid restrictions to form a Christmas bubble with other households.

It means the couple face spending Christmas Day without any of their four children for the first time since 1949, when the then Princess Elizabeth left a one-year-old Charles in the UK so she could be with Prince Philip in Malta.

Vanity Fair’s Katie Nicholl said the Queen wants her children and grandchildren to ‘enjoy Christmas with their other loved-ones’ and ‘not feel torn’ as she prepares for a ‘quiet’ festive season at Windsor.

She claimed: ‘The Queen has said that this is the year for her family to enjoy Christmases with other family members and not feel torn, as they often do, when a royal Christmas takes priority.’

Prince Charles and the Duchess of Cornwall will spend Christmas at Highgrove, in Gloucestershire, although they expect to see the Queen and Prince Philip at Windsor at some point over the festive season.

They will also see Camilla’s children Tom Parker Bowles and Laura Lopes at some point.

Meanwhile Prince William and Kate Middleton are most likely to spend Christmas at Anmer Hall, Norfolk or with the Duchess’ parents, Carole and Michael Middleton, in Berkshire.

In Tier 2 regions, like Windsor, up to six people from different households are able to mix outdoors. This means the Queen and Prince Philip could meet with family members for horse riding or walks in the grounds of Windsor Castle.

The couple are well accustomed to spending Christmas at Windsor Castle, having spent holidays at the castle before moving the celebration to Sandringham in 1988.  t the Middleton family home in Berkshire.

The Queen won’t attend a church service on Christmas Day in order to prevent crowds gathering but is expected to worship privately in Windsor Castle’s private chapel.