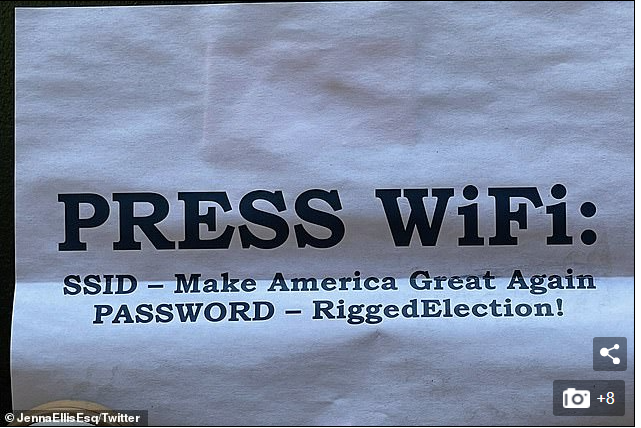 *President Trump held a rally in Valdosta, Georgia on Saturday to endorse Republican senators David Perdue and Loeffler who are facing January runoffs

*Members of the press were forced to use the password ‘RiggedElection!’ if they wanted to logon to the wifi network at the event held in an aircraft hangar

Nearly every member of the press present at President Trump’s rally in Georgia on Saturday night typed the words he had been wanting to hear since early November.

‘Rigged Election!’ journalists typed into their laptops and cellphones as the rally got underway.

Unfortunately for Trump, it wasn’t a story they were writing but the Wifi password at the venue – the latest effort by the president’s campaign to troll members of the press.

Members of the press were forced to use the password ‘RiggedElection!’ if they wanted to logon to the wifi network at the event held in an aircraft hangar in Georgia               +8

Members of the press were forced to use the password ‘RiggedElection!’ if they wanted to logon to the wifi network at the event held in an aircraft hangar in Georgia

The Trump team were fully open about their intentions.

Journalists present at the event first had to log onto the network ‘Make America Great Again,’ before then typing in the password ‘RiggedElection!’

Trump lawyer Jenna Ellis trolled reporters at the rally, tweeting that the reporters would have to type the election was ‘rigged’ if they wanted to connect to the internet at the venue, an airport hangar in Voldesta, Georgia.

‘Fake News media has to type this in if they want WiFi,’ Ellis tweeted.

‘The WiFi password at Trump’s rally for Loeffler and Perdue, in case anyone has early questions about the President’s essential themes,’ tweeted Cleve R. Wootson Jr., political reporter for the Washington Post.

‘The wifi password suggests what the theme might be tonight as the president campaigns for two Georgia senators,’ wrote Allan Smith, a political reporter for NBC News.

Indeed, as Trump kicked off his rally he continued to claim he won the state.

‘You know we won Georgia, just so you understand,’ Trump told the large crowd gathered in Valdosta for the first post-election rally for the president.

In fact, President-elect Joe Biden won the state of Georgia by about 12,500 votes out of 5 million cast.

Trump said that he traveled to Georgia to help ‘ensure’ the two Republicans win what are probably the most important Senate runoffs in US history.

The January 5 runoffs pit Perdue and Kelly Loeffler against well-funded Democratic challengers Jon Ossoff and Raphael Warnock, who are seeking to capture a state that has not elected a Democratic senator in 20 years.

Thousands attended the Rally in Valdosta,Georgia where President Trump made visit to push for election of Kelly Loeffler and David Perdue in the state’s run-off election. Pictured Donald and Melania Trump at the Valdosta, Georgia Rally

The races will determine which party controls the US Senate. Democrats need to gain both seats to seize a majority. If Republicans win one seat, they will retain control and be able to block much of Biden’s legislative agenda.

Trump’s trip to Georgia came after he personally called the governor Saturday morning to pressure him to overturn Biden’s win and to get him to order another signature audit of votes in the state.

The president asked Kemp to call a special session of the state legislature to flip the election result in his favor and appoint electoral college voters that will back him instead of the President-elect.

It marks the latest in a long line of attempts from Trump to claw back victory in Georgia after the state flipped blue for the first time in 18 years.