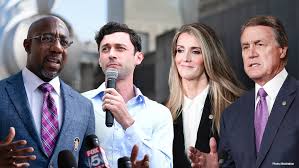 Sen. Kelly Loeffler, R-Ga., will face off against Democrat Rev. Raphael Warnock in a debate Sunday night for the closely watched battle for Senate control.

The Loeffler-Warnock debate will kick off at 7 p.m. EST on Dec. 6, after Jon Ossoff takes the stage at 5 p.m. by himself. Sen. David Perdue, R-Ga., declined invitations from the Atlanta Press Club (APC) to debate his challenger again.

Fox News Channel will air Georgia’s Loeffler-Warnock debate live, the only such matchup before the runoff election on Jan. 5.

Two Senate seats are up for grabs in Georgia after no candidate received a plurality of votes in the November election. The Senate races line up in the same year in a rare occurrence after Sen. Loeffler was appointed to succeed Sen. Johnny Isaakson by Georgia Gov. Brian Kemp. She must now fight to hold on to the seat in a special election.

“Sen. Loeffler looks forward to exposing Warnock as the most radically liberal candidate anywhere in the country and hear why he has attacked our police, military, small businesses, Israel and virtually every single voting bloc in the state of Georgia,” Stephen Lawson, Loeffler campaign communications director, said in a statement to Fox News.

Warnock has pushed for three debates. “I hear you’re ready to debate, @Kloeffler,” Warnock said in a tweet. “Assume that means I’ll see you December 6th at the Atlanta Press Club, and twice more so Georgians know who will work for them.”

At 5 p.m., Ossoff will take the stage next to an empty podium to represent the incumbent. Ossoff and Perdue debated twice before the general election. An APC spokesperson told Fox News that “we don’t feel it’s fair to penalize the candidate who has agreed to come.”

“The runoff in Georgia is an extension of the Nov. 3 general election, where 52% of Georgians voted against Jon Ossoff and his radical agenda. Perdue had a commanding first place win, outpacing Ossoff by over 85,000 votes – in nearly every other state, Perdue would have been reelected already,” Perdue communications director John Burke said in a statement about the debates.

“We’ve already had two debates in this election,” Burke continued. “In each, Ossoff lied repeatedly, and of course the media failed to hold him accountable. He refused to talk about the issues and could not defend his radical socialist agenda.”

Republicans after the Nov. 3 election hold 50 Senate seats to Democrats’ 48, counting the two independents who caucus with the Democrats. Democrats would need to take both Georgia seats with Vice President-elect Kamala Harris serving as the tie breaker to harness control of the Senate and unbind President-elect Joe Biden’s agenda.