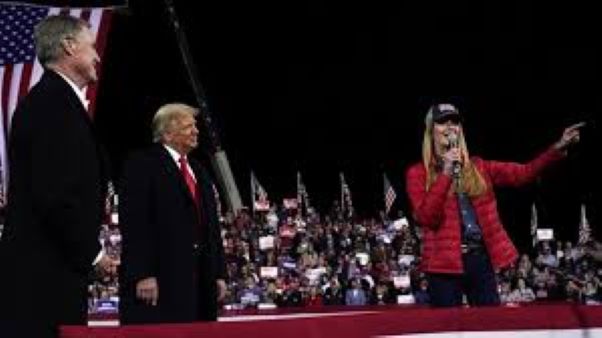 President Trump urged his supporters to vote for Republican Sens. Kelly Loeffler and David Perdue to prevent the “socialists” and “communists” from gaining control of the U.S. Senate.

“There’s never been a case where a state has had this prominence on Senate races. Never together, and this is something that’s very important and you have to get out and you have to vote,” Trump said at a rally in Valdosta, Ga., on Saturday. “If you don’t vote, the socialists and the communists win.”

Trump described to the crowd how he saw the stakes in the twin Senate runoffs.

“Very simply, you will decide whether your children will grow up in a socialist country or free country. Socialism is just the beginning for these people. They want to go into a communistic form of government,” he said.

Trump implored Georgians to vote, while still sowing distrust in the state’s handling of elections.

“You must go vote, vote early. They cheated, they rigged our presidential election, but we will still win it. They’re going to try and rig this election too.”

Loeffler and Perdue are the GOP candidates in the Jan. 5 runoff elections, which will determine if Republicans will hold the chamber, or if Democrats will control both the House and Senate, as well as the White House.

Republicans desperately need Trump supporters to return to the polls a month from now, despite unfounded claims of widespread voter fraud in the Nov. 3 election.

The balance of power for the next Senate coming out of last month’s elections is 50 Republicans and 48 Democrats. That means Democrats must win both of Georgia’s runoffs to make it a 50-50 split Senate. If that occurs, Vice President-elect Kamala Harris would be the tie-breaking vote, giving her party a razor-thin majority in the chamber.