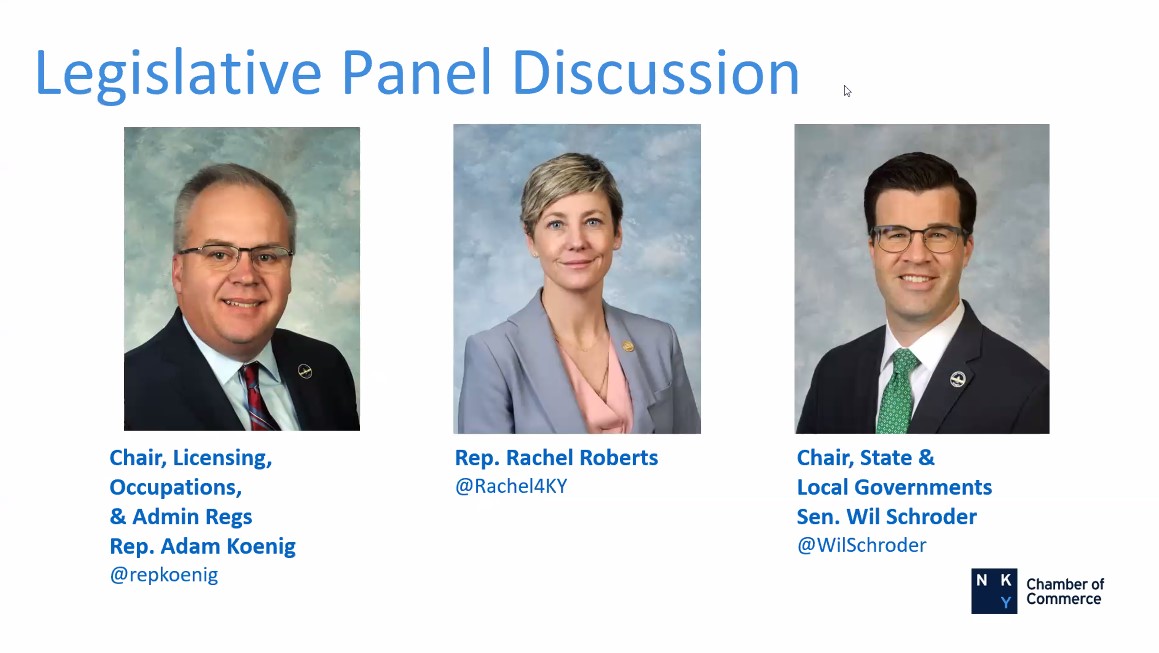 The Northern Kentucky Chamber Of Commerce hosted The “Where We Stand” 2021 Legislative Agenda Preview Tuesday, as a virtual event.

The NKY Chamber previewed its legislative agenda for the upcoming 2021 Kentucky General Assembly at the event.

Sen. Raque Adams has represented the citizens of Jefferson County in the Senate since 2015 and previously served in the Kentucky House of Representatives and on the Louisville Metro Council.

She talked big-picture about what the General Assembly hopes to accomplish in the upcoming 30-day “short” session.

I think before you can really talk about what we are going to tackle in a short session, you also have to kind of preface it with all of the new dynamics that have occurred since we last adjourned,” Raque Adams said. “We have 75 members of the House that have never kind of worked together before, we have 30 members of the Senate, which for the most part we have worked together but we do have some new members. Whenever you infuse new members…you have a different dynamic that you have to deal with.”

Leadership has pretty much stayed the same, but Raque Adams was critical of Gov. Andy Beshear for what she called a “lack of communication with the members of the General Assembly.”

“It’s not as if that’s a petty or small thing to point out,” Raque Adams said. “It’s critical when you are looking for dynamic leadership in a time of unprecedented events. So that’s another tension that we’re going to have to figure out what to deal with, when we talk about what we need to do.”

A priority during the session will  include the passage of a one-year budget, which Raque Adams said will be difficult because of the pandemic and the lack of communication regarding the numbers. She said Republican Budget Preparation Committee Chairman Chris McDaniel, R-Taylor Mill, has begun talks with the administration to get more details.

“The Beshear Administration has announced that because the COVID relief dollars that have come in have been beneficial to plug some holes,” Racque Adams said. “Once Chairman McDaniel has the whole grasp of what we’re looking at, then we’ll have these budget conversations. Thirty days, that’s really going to be hard to think globally and get some numbers put down on paper.”

A panel of state legislators then discussed the NKY Chamber’s legislative priorities and other timely topics.  The discussion was moderated by Kristin Baldwin, vice president public affairs and communications for the NKY Chamber.

Sen. Schroder has served the citizens of Campbell, Bracken and Pendleton counties since 2015.  He serves as the Chairman of the State and Local Government Committee in the Senate, while also co-chairing the Public Pensions Working Group.

Shroder talked about the increased options for voting this year and how now that, as Koenig put it, “the genie is out of the bottle,” people are going to want that to continue.

“I’m definitely a fan of expanding the in-person voting…have a set number of days,” Shroder said. “In the past, when there was excused early voting, different clerks were doing different things and that always bothered me. Every session, it seems like, we have people that talk to us about extending the time, they don’t like it just 6 (a.m.) to 6 (p.m.)

The challenge for county clerks, Schroder said is to find enough volunteers to accommodate the expanded hours.

Rep. Adam Koenig has represented the citizens of Boone and Kenton Counties since 2007.  As Chairman of the Licensing and Occupations Committee in the House he has sponsored a wide variety of beverage alcohol laws to advance the industry and continues to champion the legalization of sports wagering in the Commonwealth.

“I think it’s fair to say that everybody understands the need for new funding and I certainly do,” Koenig said. “It’s so important to Northern Kentucky that (Rep. Sal Santoro, R-Florence) is able to be the one that starts the writing of the road plan. He’s done a great job of pushing this issue. “

Koenig lauded Santoro’s efforts to promote a change to the formula by which the money is distributed, to provide more money to urban areas that contribute much of the funding for infrastructure.

Rep. Roberts is the newest member of the NKY Legislative Caucus. She represents the citizens of Campbell County and is a resident of Newport. She serves on the Licensing and Occupations Committee, as well as, the Tourism & Outdoor Recreation and Small Business & IT Committee.

Roberts talked about the small business recovery program and efforts in the upcoming session to help merchants impacted by a loss of revenue due to the pandemic and accompanying restrictions.

“I would like to see us continue to allow businesses to do “to-go” alcohol, that’s been something that has been really helpful to our restaurant industry and that they are asking for to continue,” Roberts said. “I would also like to see us working to do things to make it so that it’s easier for them to continue outdoor and sidewalk seating in the future. So many of us really enjoyed that opportunity this summer, to sit outside and feel more integrated with the community.”

Traditionally, the NKY Chamber’s “Where We Stand” legislative agenda preview is an in-person event that is attended by community leaders and stakeholders from throughout the region.

Due to safety concerns as a result of the COVID19 pandemic, the event took place virtually this year but still drew about 150 people to their computer screens.

The “Where We Stand” program can be viewed in its entirety by clicking on the link below.