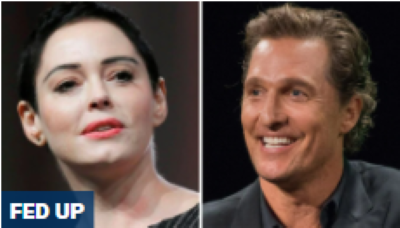 Rose McGowan is never one to shy away from calling out her Hollywood counterparts, and this time, she’s in agreement with Matthew McConaughey, who most recently blasted left-leaning stars’ hypocrisy toward President Trump supporters.

McConaughey last week spoke about “condescending” attitudes from liberals against conservatives during an appearance on Russell Brand’s podcast, “Under the Skin.”

“There are a lot of people on that illiberal left that absolutely condescend, patronize and are arrogant toward the other 50%,” McConaughey told the host.