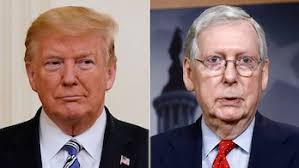 It took more than 14 hours, but President Trump finally publicly responded to a speech by Senate Majority Leader Mitch McConnell in which the Trump ally and fellow Republican congratulated President-elect Joe Biden on his White House victory.

“Mitch, 75,000,000 VOTES, a record for a sitting President (by a lot). Too soon to give up. Republican Party must finally learn to fight. People are angry!” Trump wrote on Twitter early Wednesday morning, as he re-tweeted…