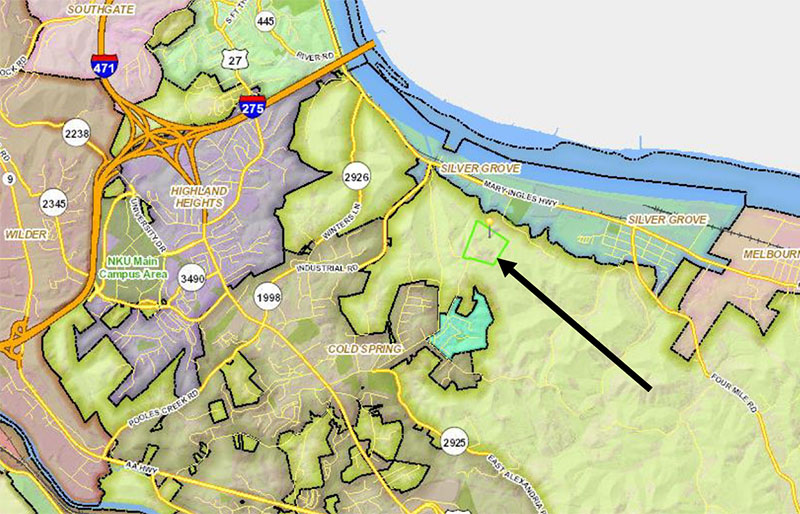 Nestled atop a lush vista 300 feet above the river and surrounded by deep woods in unincorporated Campbell County, Altura Estates will feature 19 home lots on the 50-acre site. Most of the home sites – the lots for which are being sold from $150,000 to $250,000 — have sweeping view of the Ohio River Valley and beyond. Initial interest in the site, which is situated just off of Skyline Drive in Cold Spring, has already been strong.

“We’ve shown the site to 20 people or so, and 15 have expressed some level of interest,” Bob Heil said. “The site sells itself. All I have to do is invite someone to meet me on the property, and the views take their breath away. This location is unlike anything you find in Campbell County.”

Buyers will be able to choose from a list of pre-qualified custom homebuilders and home designers/architects. The Campbell County & Municipal Planning & Zoning Commission has already approved the preliminary plat for the site, with site-readiness work scheduled to start early in 2021 and home construction expected to start by mid-summer.

The Heils are well-known business owners and operators in the Greater Cincinnati/Northern Kentucky region. Bob Heil is the CEO of KLH Engineers in Fort Thomas, one of Greater Cincinnati’s leading engineering firms. Ken Heil founded Barleycorns 45 years ago — a collection of three popular restaurants in Florence, Lakeside Park and Cold Spring and formerly in Cincinnati and Newport. Joe Heil is the co-owner and operations manager at Barleycorns.

The Diocese of Covington opened Campbell Lodge in 1959 as a home for at-risk boys and teens.   The Heils, who grew up in nearby Newport, were familiar with the home while playing basketball for St. Vincent DePaul Catholic elementary school in South Newport.

“When Bob and I were in the fifth and sixth grade, we practiced in the gym at Campbell Lodge,” recalled Joe Heil.

“And when I was at Newport Catholic (High School) in the ’70s, I went to school with a number of guys who were living at Campbell Lodge,” Bob Heil said. “They were kids who had been falling through the cracks and getting out of bad situations. But they were great guys, and I was always impressed that the Diocese operated Campbell Lodge to help those kids and give them a better life.”

Campbell Lodge closed its doors in 2012. “Joe and I looked at the property a few years ago, and considered developing it,” Ken Heil said. “But the timing wasn’t right.”

The Heil brothers wanted to make sure the concept for Altura Estates would be acceptable to nearby neighbors and the community. So, they met with neighbors, receiving tremendous positive response and support for a high-end residential development on the property.

“We have Barleycorns in Cold Spring and I live in Cold Spring, so I am really glad we are developing something that is welcomed by the community,” Joe Heil said.

“We’re excited to be once again investing in the community in which we grew up and look forward to making this a trophy residential development,” Ken Heil said.

The existing buildings on the site will be demolished with the exception of the equestrian-riding arena, which was built as part of a Leadership Kentucky community-service project for the Lodge a few years before it closed.

“The riding arena was in good condition and only used for a short period of time before Campbell Lodge closed,” Joe Heil said. “We thought it was important to try to find a new home for the arena, so we will be donating it to Potter’s Ranch, which will use it as part of its ministry at its retreat center in Union, Ky.”

“We are so pleased to be breathing new life into this incredible property,” said Bob Heil, who intends to live in the development with his wife, Mary Beth. “The residents of Altura Estates will enjoy rural estate living just 10 minutes from downtown Cincinnati.”

Financing of the project is being handled by Joe Mayer at Heritage Bank.