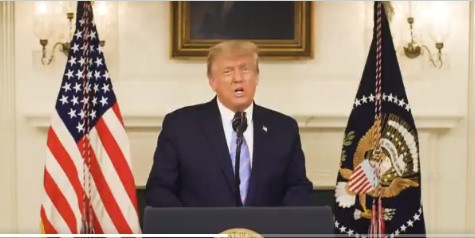 President Donald Trump addressed the January 6 events in the nation’s capitol in a speech delivered via Twitter Thursday evening.

He described the storming of the U.S. Capitol Building by a throng gathered to protest the November election result and show support for his presidency as a “heinous attack,” saying “America must always be a nation of law and order.”

The President promised a smooth, orderly and seamless transition of power and encouraged the nation’s citizens to focus on healing and reconciliation.

The message was delivered via Twitter on the same day Trump, who has utilized social media more extensively than any of his predecessors, was banned from Facebook for the duration of his term.

The message was viewed by 11.1 million people in the first hour after it was posted.

Click here to get more news from the Bulldog Report.