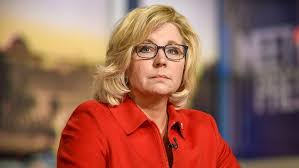 Rep. Liz Cheney, the chairman of the House Republican Conference, said she will vote to impeach President Trump

Rep. Liz Cheney, R-Wyo., is facing calls from some Republican lawmakers to step down from her leadership post as chairwoman of the House Republican Conference after she announced that she will vote to impeach President Trump.