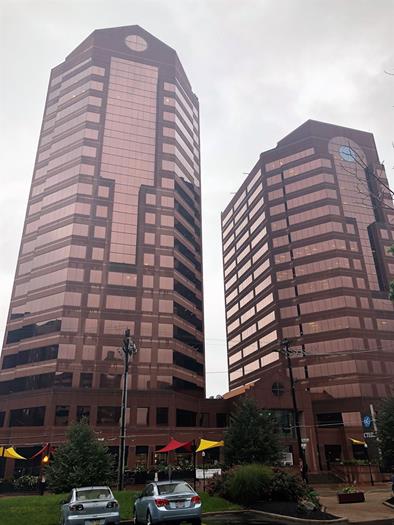 Protective Life Corp. will be taking up 67,000 square feet of space in the RiverCenter l office tower, left, on the Covington riverfront (provided photo).

COVINGTON, Ky. – There was a time – more than a century and a half long, in fact – when manufacturing dominated Covington’s economy, the city’s job base solidly sitting on the production of goods primarily in its inner core, including things like wrought-iron fencing, parking meters, machine tools, circuit breakers, pork, milk, and beer.

These days, more than 20 percent of Covington’s jobs are found in the finance and insurance industry. And on Tuesday night, the Covington Board of Commissioners agreed to partner on a major business relocation that will add to that number.

Protective Life Corp. – a major player in its field – is investing $18.3 million into leasing and retrofitting 67,000 square feet of space in the RiverCenter l office tower on the riverfront, a move first announced by the Commonwealth of Kentucky last month.

The company – which provides financial services through the production, distribution, and administration of insurance and investment products throughout the United States – said it will bring approximately 100 employees to Covington with plans to double its workforce over time.

“This is a fantastic win for Covington that adds to our reputation as the home of regional headquarters, brings high-paying jobs, expands the job market, and all but fills up our Class A office space on the river,” Covington Economic Development Director Tom West said.

“Protective Life is moving into the ‘sweet spot’ of our local economy,” he said.

The Board of Commissioners approved a six-year, 1 percent payroll incentive for each new job that Protective Life relocates or creates, provided the company stays in Covington for at least 12 years.

West noted that Covington expects to realize $5 in new tax revenue for every $1 it forgoes.

The growing company traces its roots to its flagship company that was founded in 1907. It’s based in Alabama, and its Greater Cincinnati location in Covington will be one of its three “core sites” nationwide.

The company said it hopes to move into its Covington space this fall. In its December release, it listed the amenities at RiverCenter (an on-site fitness center, in-building parking, on-site restaurants, access to the new Riverfront Commons riverwalk) and said the surrounding neighborhood offered a “walkable environment, spirited community and strong business environment.”

“As we head into the new year with a focus on growth and scale, our relocation to the Covington neighborhood enables us to expand our workforce within the region,” said Aaron Seurkamp, President of the Retirement Division at Protective Life. “Covington is a lively community that offers a desirable business environment for Protective and provides our employees with impressive industry-leading amenities, along with long-term growth opportunities across teams.”

Tri-ED, a regional agency whose mission is to bring investment and jobs to Northern Kentucky and that was instrumental in securing a state incentive for the company, noted that Covington was becoming increasingly attractive to business executives.

“The talent and amenities that Covington provides were important factors in Protective Life’s decision to locate a new core site in Northern Kentucky,” said Kimberly Rossetti, Vice President of Economic Development for Tri-ED. “We appreciate our partnership with the City of Covington and look forward to Protective Life’s success and growth.”

Momentum in The Cov:
Indeed, with Protective Life’s announcement in December, West said Covington had announced 2,100 new jobs and $85.6 million in private investment in 2020, despite the pandemic.

Click here to read more from the Bulldog Report