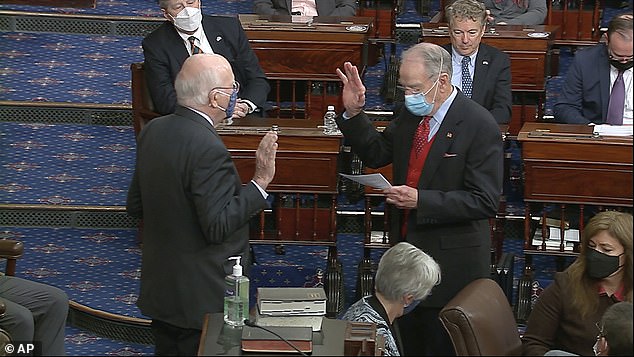 In this image from video, Sen. Chuck Grassley, R-Iowa, swears in Sen. Patrick Leahy, D-Vt., the president pro tempore of the Senate, who will preside over the impeachment trial of former President Donald Trump, in the Senate at the U.S. Capitol in Washington. Leahy was hospitalized after telling the Capitol physician he wasn't feeling wel

Vermont Democratic Sen. Pat Leahy was hospitalized Tuesday just hours after being sworn in to preside over the second impeachment of President Donald Trump.

Leahy, 80, is the president pro tempore of the Senate. He is third in the line of succession and the most senior Democrat in the Senate.

He took up his role presiding as other senators were sworn in as the court of impeachment Tuesday.