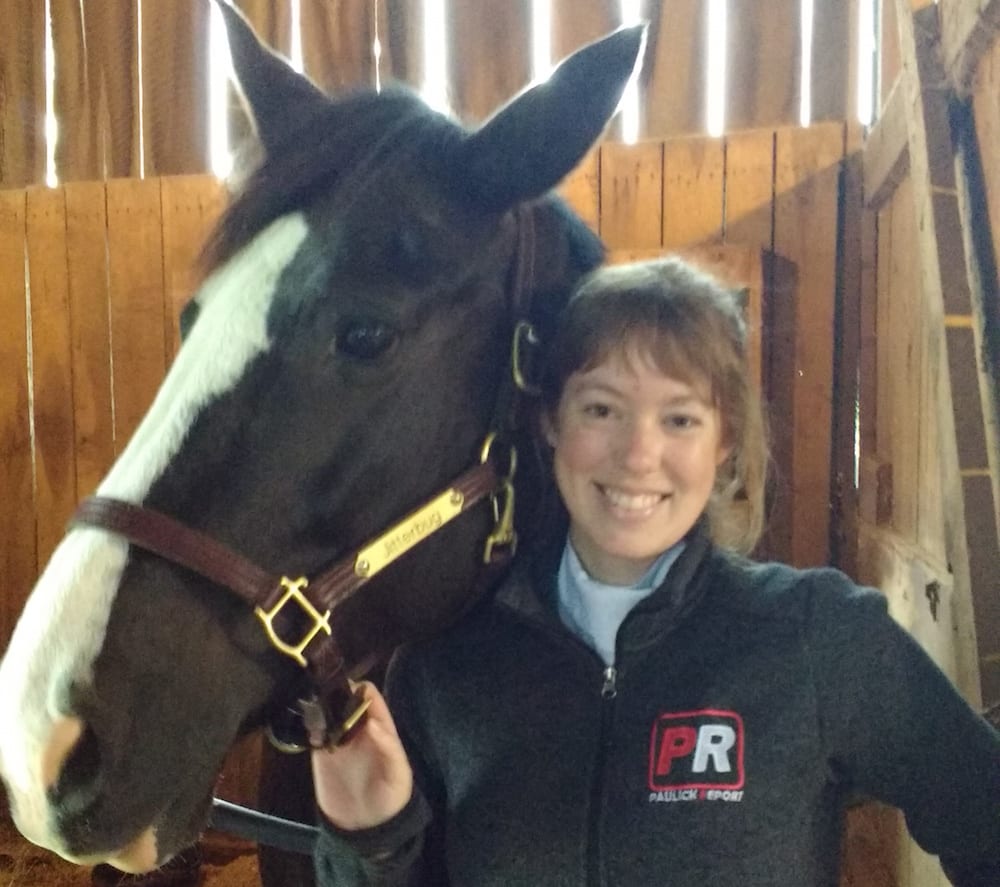 Natalie Voss and Jitterbug, her trusted Thoroughbred-Percheron cross. Courtesy of the Paulick Report

Natalie Voss, writing for the Paulick Report, was recognized with thoroughbred horse racing’s 2020 Eclipse Award in both the Feature/Commentary Writing and News Enterprise categories at Thursday’s ceremonies.

“I never could have imagined this happening in my wildest dreams,” said Voss, upon learning of her two Eclipse Awards in 2020. “It’s a tremendous honor to just win one award, but to win two in one year is unfathomable.”

The Eclipse Awards, usually an in-person event, took place virtually this year, due to the pandemic.

Voss, from Georgetown, Kentucky, has now won three Eclipse Awards. She won her first Media Eclipse Award in 2016 for News/Enterprise writing for her article on the lurking dangers of concussions for jockeys, which was also published in the Paulick Report.

In the Feature/Commentary Writing Category, Voss won for “Angel on His Shoulder.” She captured the News/Enterprise award for a three-part series on thoroughbred aftercare.

A brief description of the stories is included here.

In “Angel on His Shoulder,” Voss describes the journey and fate of a claiming horse named Inked, and how he touched the lives of his original owner Kirsten Fada, his breeder, Susan Young, and horse transporter Hannah Meier over a three-year period. Each of these women, with no connection to each other at first, helped assure that Inked would have a safe home after the track. Fada eventually adopted him for a second career after an improbable reunion at the Second Stride OTTB program at Moserwood Farm in Kentucky.

“I’m so pleased to see aftercare stories win in both categories this year. I really believe there are just as many compelling stories in that world as there are on the racetrack, and that they are just as much a part of the Thoroughbred industry.”

In her three-part series, Voss explores the achievements and struggles of the Thoroughbred aftercare movement that has reached prominence in the past decade. What began as one article on the phenomenon expanded into a series through the encouragement of publisher Ray Paulick and former Editor-in-Chief, Scott Jagow.

“I had some sense before I began the research process that the volume of horses needing aftercare was greater than the current infrastructure could handle,” said Voss, who earned a degree in Equine Science and Management from the University of Kentucky and also worked at the Secretariat Center at the Kentucky Horse Park before launching a career in journalism. “But the disparity between the number of horses in need of a second career and the capacity of the various accredited organizations was greater than I’d imagined, and really shows that more needs to be done.”

In part one of the series, “A Decade In, How Are We Doing With Thoroughbred Aftercare?,” Voss traces the evolution of aftercare from increased awareness of the problem through the explosion of social media, to initial “check off” fundraising efforts establish by The Jockey Club and Thoroughbred Charities of America, to the great leap forward to the creation of the Thoroughbred Aftercare Alliance, which established high standards for accreditation and has overseen the distribution of $17.2 million to accredited organizations. The creation of second career incentive programs like Thoroughbred Makeover and The Jockey Club’s Thoroughbred Incentive Program were also key.

Part two of the series, “Emptying The Ocean With A Teaspoon: The Challenges Of Aftercare,” raises questions about the cost of care for the high number of horses retired each year and the fate of horses that are never raced, and how retirement organizations can handle that load. It also raised questions about the slaughter pipeline and how the economics of that industry impact OTTBs.

Part three of the series “Aftercare Should Not Be An Afterthought: Solutions For The Future,” focused on the reliance on funding, continuing encouragement of horsemen to avoid “one final start” before retirement, and understanding that horses that retire healthy stand a far better chance of a second home that does who are not; and improved communication between racetracks and aftercare organizations on limiting the slaughter pipeline.

Voss is the first person to sweep the writing categories since the legendary Bill Nack accomplished the feat in 1991.

These are the third and fourth Eclipse Awards for the family.