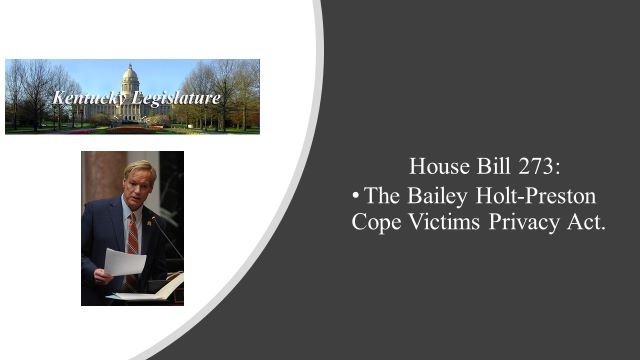 FRANKFORT— The Kentucky House floor erupted in applause this afternoon after the passage of House Bill 273: The Bailey Holt-Preston Cope Victims Privacy Act.

The bill is named after 15-year-olds Bailey Holt and Preston Cope. They were shot and killed at Marshall County High School in Benton on Jan. 23, 2018.

HB 273 would amend the Open Records Act to exclude photographs and videos that depict a person’s death, killing, rape or sexual assault. Those involved in the incident may allow the release of the records.

Rep. Chris Freeland, R-Benton, the primary sponsor of HB 273, said the state’s Open Records Act was passed before everyone had cell phones and the ability to easily record and take photos.

“That technology exists and it’s good,” Freeland said. “It’s used to help put away people and it’s helped make sure that trials have good evidence, so I’m sure no one is objecting to that in anyway whatsoever.

“But there is video of the shooting that took place inside Marshall County High School where 14 children were severely injured. And two lost their lives that day.”

Freeland said the Commonwealth Attorneys in Marshall County as well as Bailey and Preston’s families expressed concerns about the possibility of the video and any associated photos being released.

Freeland added that this bill is not a measure against any newspaper or TV outlets and that many states have already have passed similar bills.

“This is just a way to protect families,” Freeland said. “… This would also protect anyone who’s survived rape or sexual assault.”

This legislation is not new to the Kentucky General Assembly. It was unanimously approved by the House last legislative session but, like many bills that stalled after the COVID-19 pandemic hit, it did not become law.

HB 273 contains an emergency clause, meaning it would become effective immediately if it is passed into law rather than 90 days after adjournment of the legislature. It will now move to the full Senate for consideration.