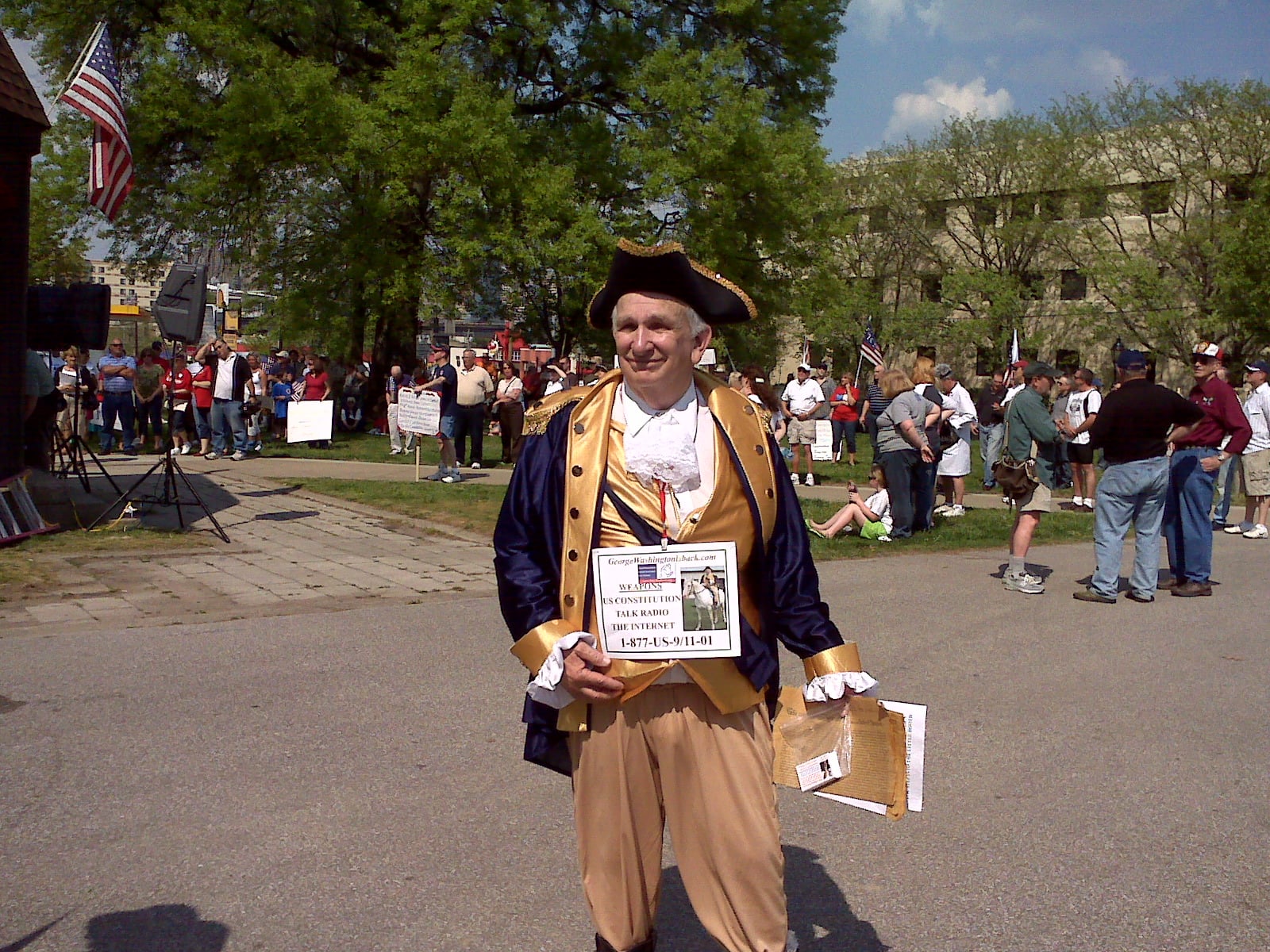 Johnson was recognized throughut the region as a businessman and as Northern Kentucky’s George Washington.

He often donned his General George Washington attire and appeared at Tea Party meetings, political rallies and other events throughout the region, including the annual Fancy Farm picnic in Graves County.

“Kenzie Paul “Paul” Johnson, Loved God, Family, Country, and friends. He was an American Patriot who loved America with a Passion.

Paul admired President Ronald Reagan, who said; “Freedom is never more than one generation away from extinction. We didn’t pass it to our children in the bloodstream. It must be fought for, protected, and handed on for them to do the same, or one day we will spend our sunset years telling our children and our children’s children what it was once like in the United States where men were free.”

Paul Knew that our first president, General George Washington feared God Reverently, who with his very brave poorly dressed, underfed militia, Defeated the British in a fight for Liberty. Our founding fathers, were bold patriots who pledged their lives, fortunes and sacred honor as they signed the Declaration of Independence. To some it became their death sentence.

Paul greatly admired General George Washington and enjoyed dressing in costume as him for political events and was never ashamed.

He was well known in the Cincinnati Tea Party and the Greater Cincinnati area. He traveled long distances, to Fancy Farm Kentucky, and even as far as Washington D.C. in costume to peacefully protest abusive, out of control government spending and high taxes. Paul was a extremely hard working tax paying citizen, he was never against taxes but strongly apposed tax abuse. Paul was very friendly and never violent. He had a righteous anger, but did his best to not let the sun go down on his anger.

Paul made a positive impact in the Northern Kentucky region and his image as George Washington made it National News Media. He was a very colorful man with a very distinctive voice that could not be mistaken, especially on his self produced 55KRC Radio ads for his small business, Paul Johnson Insurance.

He was very active in the Boone County Tea Party and frequently attended Northern Kentucky Tea Party meetings and events. Inspired by patriots from “The Boston Tea Party” TEA = Taxed Enough Already. Paul knew big government robs us all of our liberty and freedom. That’s why colonialists fought so hard to separate from a Tyrant King George III of Great Brittan.

Paul strongly supported Pro-Life, pro Liberty Candidates. He understood the importance of voting for Godly, Constitutionally based candidates. Paul loved Governor Matt Bevin, and President Donald J. Trump and was never ashamed of them. Paul lived a full wonderful life to the age of 84. He was a true believer in Jesus Christ and is in a much better place. Paul you made a positive difference. You you were my friend and will be missed. “Never Forget!”

Paul and his classmates worked in Kentucky to open up closed churches before moving to Richmond, VA and Ross, OH. He then moved to Kentucky and sold health and life insurance. In 1984 he started the company Paul Johnson Insurance which is still in business.”

Johnson was born to the late Lee and Lula Cummings Johnson on May 25, 1936 and grew up in Butler, KY. He graduated from Butler High School in 1954 and graduated from Cincinnati Bible Seminary in 1959. He was a Timothy of Grassy Creek Christian Church. On January 1, 1960 he married Betty Z. Estes Johnson and they just celebrated 61 years of marriage.

In addition to his parents, Paul is preceded in death by brothers Donnie Johnson, Bob Johnson, Lee Johnson Jr. and sister Frances Nash.

Paul loved the Lord and his Country. At the time of his passing he was doing house church. In his younger years he loved to play softball.