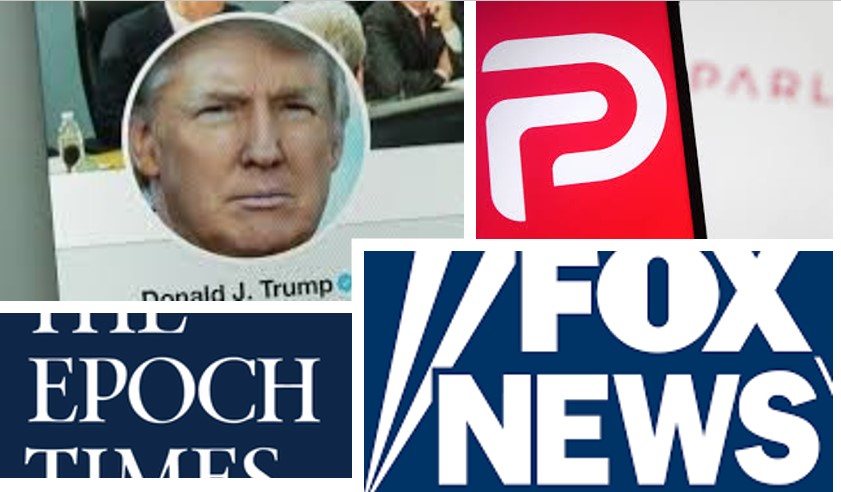 On his Feb. 11 show, Tucker Carlson announced that his Fox News program has been targeted for cancellation by some heavy hitters:

“…in the last several weeks, and particularly in the last 24 hours, the call to take this show off the air by groups funded—for real—by the Ford Foundation, or by George Soros, by Michael Bloomberg, by Jeff Bezos, has become deafening, going after our advertisers, going after the companies that carry our signal into your home.”

Carlson added that it might be part of a larger effort to silence Fox News and other media.

It would be easy to dismiss the claim if there weren’t examples of that larger effort to silence conservative voices on several platforms.

Lets not forget that Twitter issued a lifetime ban on Donald Trump, who was at the time still the sitting President of the United States.

Service providers of the social networking service Parler shut it down in early January, following the Capitol riot. That decision led to the dismissal of CEO John Matze and threatened to wipe out the microblogging company completely.

Parler, a popular platform for conservative voices, surged in popularity in the months leading up to the November 2020 General Election. It reportedly registered more than 7,000 new users per minute during the election. Its app was downloaded nearly 1 million times in the week following election day.

On Feb. 15, Parler announced the return of service for existing users with plans to open the service to new signups soon, but its future remains unclear.

On Feb. 1 Epoch Times Editor-in-Chief for U.S. Editions Jasper Fakkert announced that YouTube demonetized its account “without prior warning or a specific explanation as to why.”

The Epoch Times identifies itself as the “fastest-growing independent news media in America,” but it’s content strongly leans far-right.

There are hundreds of stories of smaller conservative news outlets and individuals who have their accounts suspended or removed from social media platforms, including YouTube, Twitter, Facebook, and others.

Attempts to silence the dissemination of information is nothing new. Throughout history, journalists have always played the role of watchdog and they, and people who shared information with them, have paid a price.

In 1735, before America was even America, John Peter Zenger was jailed, and later acquitted of seditious libel, for refusing to reveal the source of criticisms of New York’s Colonial Governor.

There are dozens of similar examples throughout our country’s history. There is also no shortage of examples from “less enlightened” countries where investigative journalists and columnists have paid the ultimate price.

Sometimes, even in this county, the effort to muzzle the watchdog is effective.

The explosive comments from the interview directly contradicted Congressional testimony from Big Tobacco executives that they were unaware they were selling an addictive product.

It would seem that information, aired on one of the most respected news programs in network television history, would be a turning point in the effort to understand the negative health consequences of smoking.

60 Minutes viewers didn’t see that interview until a year later, however, and only after the Wall Street Journal published a front-page story on Wigand.

The reason: Big Tobacco threatened to litigate CBS out of business for interfering with the confidentiality agreement Wigand had signed. CBS instructed 60 minutes not to run the story and left the heralded news program with egg on its face.

Wigand’s story was chronicled in the 1999 movie, “The insider,” starring Russell Crowe. He taught for a time at duPont Manuel Magnet High School in Louisville after leaving Brown & Williamson. He was named Kentucky Teacher of the Year in 1996 before becoming a leading voice on the dangers of tobacco use.

His ordeal helped shaped the whistleblower laws that protect those who report misconduct or illegal activities today.

The difference between efforts to silence Zenger, Wigand on 60 Minutes, and everything between and since, is that there was almost always a specific motivation for the action.

The actions by today’s social media platforms and multibillionaire businessmen seem to be focused on silencing the conservative viewpoint, regardless of the issue.

It’s one thing to say, this specific statement is inaccurate, so we won’t allow it on our platforms.

This seems more like, “We don’t agree with what Tucker Carlson and Fox News, or the American public on Parler, have to say, so we are going to eliminate their platforms, or pressure advertisers that sponsor their programs to pull out.”

The argument that these social media platforms are not networks or journalists, so they have the right to decide what is posted, is no longer true.

Almost every news outlet in the country routinely shares information and quotes from Twitter, Facebook, Instagram and other social media outlets. For better or worse, they have become journalism platforms of the 21st century and should be regulated as such.

The decision by these social media outlets to censor conservatives, while allowing the seemingly unfettered dissemination of hatespeak by many liberal voices is unacceptable.

The vitriolic social media comments attributed to some influential liberal posters after the death of Rush Limbaugh are beyond shameful, and disrespectful to his family and supporters.

“I’m glad he lived long enough to get cancer and die,” and “Feeling very sorry for the people of Hell who now have to deal with Rush Limbaugh for the rest of eternity,” are just a few that remain on social media.

For five years I worked at a publication that posted a weekly column from one of the most liberal, conservative-hating writers I have ever encountered, in a heavily Republican region.

I heard criticism every week from people in the community who did not agree with him, some even despised him. Not once did anyone suggest his opinion be silenced.

That’s all I’m saying here. It is acceptable, even necessary, to disagree sometimes with an opinion, but we must always “defend to the death (the) right to say it.”

Many years ago, I wrote a point-counterpoint column with another journalist and I almost always took the side I didn’t support. I was surprised that, while my mind was not often changed, I usually came away with a better understanding of that perspective.

The best way to dispute a point of view is to allow it to be heard, really listen to it yourself, and use your own information, facts and supporting opinions to discredit it if you disagree.

Attempts to silence it should always be fought against and defeated.