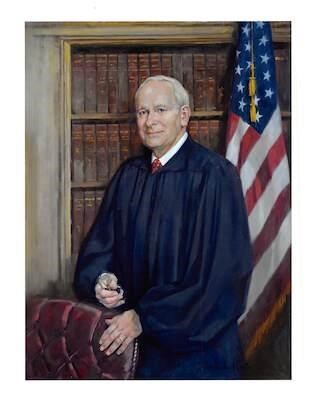 He received an A.B. degree from Villa Madonna College (now Thomas More University) in 1953 and proudly served in the U.S. Army Infantry from 1953 to 1955. He then received an M.A. degree from Xavier University in 1957, and his J.D. from the University of Cincinnati College of Law in 1960.

Throughout his life, Justice Wintersheimer was an extraordinarily hard worker, who was always humble and kind, and committed to securing justice for all. He began his legal career in private practice and served as the City Solicitor for Covington for fourteen years.

He soon became known as a pioneer in the area of consumer protection and was characterized as the proverbial “Don Quixote” battling the windmills of the powerful utility companies. Justice Wintersheimer won that battle and many others obtaining a $1.3 million refund for Northern Kentucky consumers. In 1976, he was elected to the Kentucky Court of Appeals where he served until his election to the Kentucky Supreme Court in 1982.

He was re-elected three times and served on the Kentucky Supreme Court for 24 years until his retirement at the end of 2006. Justice Wintersheimer was the most prolific opinion writer in Kentucky history, averaging over 50 opinions each year. His opinions addressed significant issues including establishing the Family Court in Kentucky; allowing for economic development such as the Toyota plant in Georgetown, Kentucky; allowing child witnesses to testify via closed circuit television; upholding open records laws and laws imposing strict standards on drunk drivers.

Justice Wintersheimer was a brilliant teacher and regarded as an esteemed legal scholar in the field of State Constitutional Law. He first taught Business Law at Thomas More College, then taught Kentucky Constitutional Law as an adjunct faculty member of the Chase College of Law for over 20 years.

He was a founding member of the Chase Inn of Court and was a dedicated member of countless boards including the American Judicature Society, Institute of Judicial Administration, American Society of Writers on Legal Subjects, Board of Visitors of Chase and UC College of Law, Board of Advisors of WNKU, and Foster Parent Review Board.

Justice Wintersheimer was a devoted family man and a devout Roman Catholic, who was admired for his dedication, intelligence, principle and sincerity. He presided at countless swearing in ceremonies of new lawyers and elected officials, including perhaps most notably and memorably, that of his wife, Alice, when she became a Covington City Commissioner. His signature opening refrain for each of these ceremonies was “This is the day the Lord has made, let us rejoice and be glad.” Psalms 118:24. It truly is.