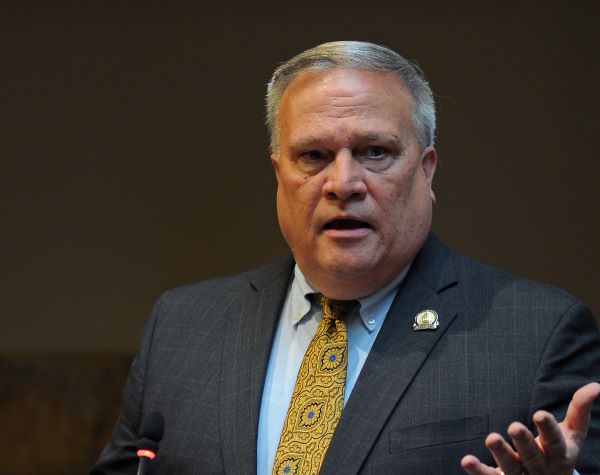 FRANKFORT – Legislation to limit the use of no-knock warrants passed the Kentucky Senate today by a 33-0 vote.

The measure, known as Senate Bill 4, would create procedures and requirements for the issuance of both search warrants and arrest warrants that authorize entry without notice, commonly known as no-knocks.

“We are not here to criticize police in general, but on a night this past year 2020, there was some bad policing that took place,” Senate President Robert Stivers, R-Manchester, said about the fatal shooting of Breonna Taylor. “This brought to the forefront some things that needed to be changed because what happened that night could happen to anybody. The sanctity of our homes should be protected – and they are by both of our constitutions – but sometimes we have to do more to clarify the process.”

SB 4 would greatly limit when no-knock warrants could be sought. They would be allowed for instances where someone was believed to be in immediate danger, such as kidnapping cases. The no-knock warrants would also be allowed when sought in connection to cases involving certain violent crimes, terrorism or weapons of mass destruction.

SB 4 also prescribes how to obtain no-knock warrants. An officer seeking a no-knock warrant would have to get approval from supervisors and certify the warrant application hadn’t been “shopped,” the practice of trying to find a receptive judge. The bill would also make clear that an officer’s false statement in a warrant application constitutes felony perjury. And the approving judge’s signature would have to be legible.

“How would this have changed the circumstances of that night where Breonna Taylor lost her life?” Stivers said. “As I understand it, this was a no-knock search at 1 o’clock in the morning for … evidence of drug trafficking. Think about that.”

Stivers then rhetorically asked if police officers should be going into someone’s home unannounced at 1 a.m. before answering himself with a “no.”

Stivers remarks were followed by a nearly two-hour floor debate on race, policing and the role poverty plays.

Sen. Gerald A. Neal, D-Louisville, recounted how he was once assaulted by a police officer.

“I support Senate Bill 4, but this is just the beginning,” he said. “Our problems are broader. They are deeper. They are going to require a long-term willingness to understand and do those things that serve us all.”

Sen. John Schickel, R-Union, said he supported SB 4. He then read a portion of the Fourth Amendment of the U.S. Constitution, which speaks to unreasonable searches and seizures.

“This is the framework this discussion is based on,” Schickel said. He added that his prior experience as a police officer, jailer and U.S. Marshal made him realize warrant reform has been needed in Kentucky for a long time.

“There were times when I would leave these search warrants with not a real good feeling in my stomach, knowing we could have done a better job,” Schickel said while recalling working on narcotics investigations.

Another retired law enforcement official, Sen. Danny Carroll, R-Benton, also stood in support of SB 4. He and several other lawmakers, however, also stressed that law enforcement was not the enemy.

Senate Minority Caucus Chair Sen. Reginald Thomas, D-Lexington, said he liked how SB 4 would outline how to execute no-knock warrants. The bill would require the warrants only to be executed by a unit trained for resolving high-risk situations, such as Special Weapons and Tactics (SWAT) teams. Thomas said an important provision that wasn’t a focus of discussion was a requirement that team members executing the warrants wear body cameras to record the events.

During a committee hearing on SB 4 earlier in the day, Sen. Johnnie Turner, R-Harlan, said he liked a provision in SB 4 requiring no-knock warrants to be served between 6 a.m. and 10 p.m. unless exigent circumstances existed. He said during his 40 years of practicing law he has observed the problems created by serving warrants at all hours of the day.

“Now they have strict guidelines to follow,” he said. “If not, there is going to be repercussions brought.”

Those repercussions, under SB 4, would include making all evidence gathered by the warrant inadmissible in court.

SB 4 now goes to the House of Representatives for further discussion.