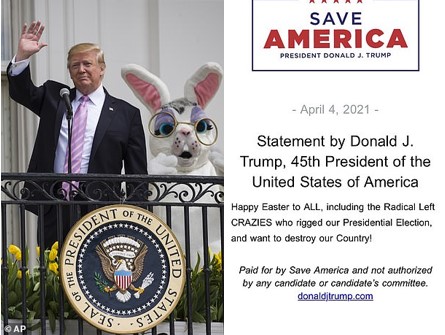 ‘Happy Easter To ALL, Including The Radical Left CRAZIES’

By RORY TINGLE and BEVAN HURLEY

Donald Trump issued an unusual Easter message Sunday resembling a tweet – in which the former president attacked his Democrat enemies.

‘Happy Easter to ALL, including the Radical Left CRAZIES who rigged our Presidential Election, and want to destroy our country!’ Trump wrote in the statement, which was released by his Save America PAC.