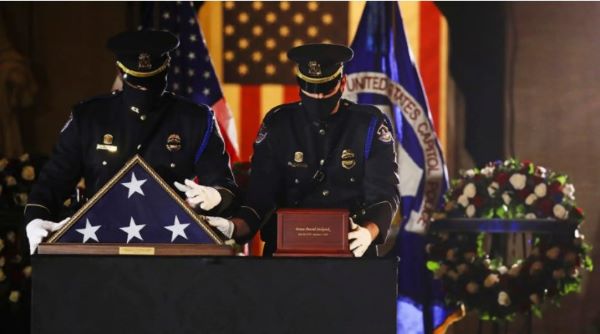 An honor guard places an urn with the cremated remains of U.S. Capitol Police officer Brian Sicknick and folded flag on a black-draped table at center of the Capitol Rotunda to lie in honor Tuesday, Feb. 2, 2021, in Washington. (Leah Millis/Pool via AP)

Capitol officer Sicknick died of natural causes after Jan 6 riot: Medical examiner
Two men accused of assaulting U.S. Capitol Police officer Brian Sicknick, who later died, conspired to attack law enforcement during the Jan. 6 riot and used pepper spray to do so, despite earlier reports that they had been using bear spray, prosecutors alleged during a Tuesday morning bond hearing.

George Tanios, 39, of Morgantown, West Virginia, and Julian Khater, 32, of Pennsylvania, appeared for a virtual hearing in the U.S. District Court for the District of Columbia, where they face charges of…