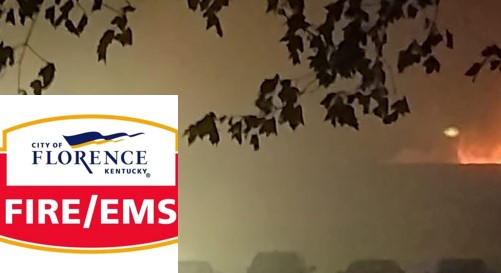 Upon arrival, crews found a fully engulfed structure fire at the 36-unit apartment building and residents leaping from the upper floors to escape the flames and smoke.

The blaze was visible for miles and several spectacular photos were posted to social media.

A second alarm was called for and ambulance/EMT crews from several local departments responded to assist the injured and bring the blaze under control.

Crews rescued 10 people from the structure and eight of the injured were transported to local hospitals.

The cause of the fire is under investigation but a release from the Florence Fire/EMS Department indicates smoke detectors were in place and working.

The Florence Fire/EMS Department issued the following release regarding the incident:

Florence Fire/EMS units were dispatched early this morning to a report of a structure fire in the 6700 block of Parkland Place at approximately 01:20 am.

Responding units were advised of multiple people trapped in the building. Crews arrived to find heavy fire and smoke coming from a 36-unit apartment building.

Upon arrival, occupants of the building were seen jumping from upper floors and numerous occupants visibly trapped in the windows. A second-alarm was called for as well as 5 additional ambulances.

Fire crews were able to rescue 10 trapped occupants via ladders while also getting the fire under control. A total of 8 injured occupants were transported from the scene to local hospitals.

The building sustained extensive damage. Red Cross was able to assist with temporary housing for the displaced occupants.

There is no preliminary estimate of the damage and the cause of the fire is under investigation.