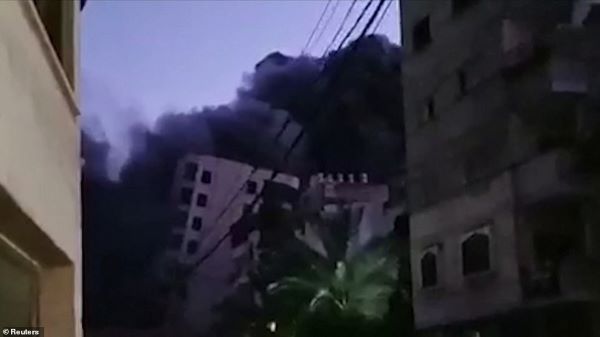 Pictured: Video footage from Tuesday evening showed three plumes of thick, black smoke rising from a Gaza residential block as it toppled over following an Israeli air strike. A large residential tower block in Gaza has collapsed today after one of several dozen Israeli cross-border air strikes on Tuesday night, as Hamas vowed to turn Israel into 'a hell'

By ROSS IBBETSON and CHRIS JEWERS

FOR DAILYMAIL.COM MAILONLINE, AP and AFP

Officials in Gaza said 35 Palestinians – including ten children – have been killed in the latest clashes. The Israeli military claimed at least 16 of the dead were militants, while seven deaths have been attributed to the same family, including three children. Some may have been the result of errant Hamas missiles.