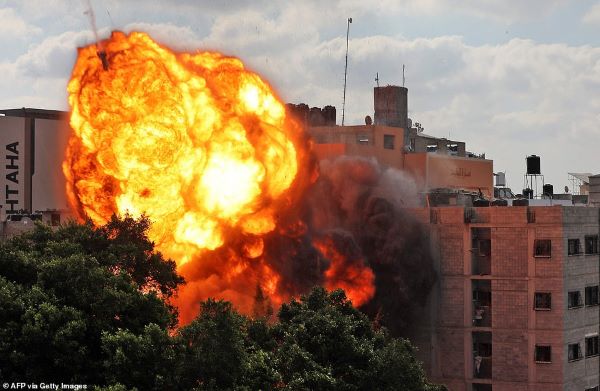 A ball of fire engulfs a tower block in Gaza City early on Thursday morning as Israel presses forward with its campaign against Hamas. 'The campaign is still far from over,' a cabinet minister said after last night's meeting with Netanyahu. 'Whatever we don't do now, we will have to do in six months or a year from now.'

Israel Deploys Troops On The Gaza Border In Preparation For Possible Ground Invasion And Warns: ‘We Will Not Stop’

FOR THE DAILY MAIL

Benjamin Netanyahu has rejected a peace offering from Hamas as Israel today deployed troops along the Gaza border in preparation for a possible ground invasion as both sides exchanged relentless bombardments.

More than 600 Israeli air strikes since Monday have levelled Islamist bases and slain nine top commanders including the Hamas intelligence chief, their lead missile designer and their terror boss in Gaza City.