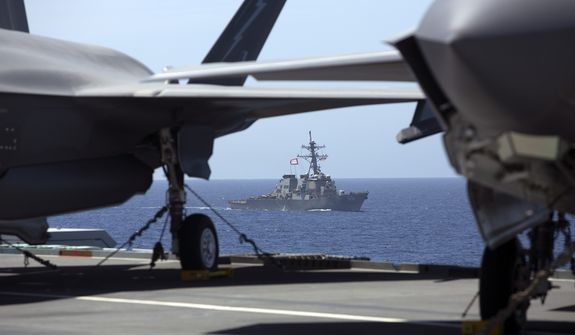 A ship is seen off the deck of the aircraft carrier HMS Queen Elizabeth as it participates in the NATO Steadfast Defender 2021 exercise off the coast of Portugal, Thursday, May 27, 2021. As tensions with Russia simmer, thousands of NATO troops, several warships and dozens of aircraft are taking part in military exercises stretching across the Atlantic, through Europe and into the Black Sea region. The war-games, dubbed Steadfast Defender 2021, are aimed at simulating the 30-nation military organization's response to an attack on any one of its members. (AP Photo/Ana Brigida)

The U.S. and its NATO allies on Monday conducted a set of major war games across Europe, while Russia responded by announcing plans to send at least 20 new military units to its western border.

The Memorial Day maneuvers are the latest signs of rising tensions between Washington and Moscow, coming just weeks before President Biden is to meet Russian President Vladimir Putin for a high-stakes summit in Geneva.