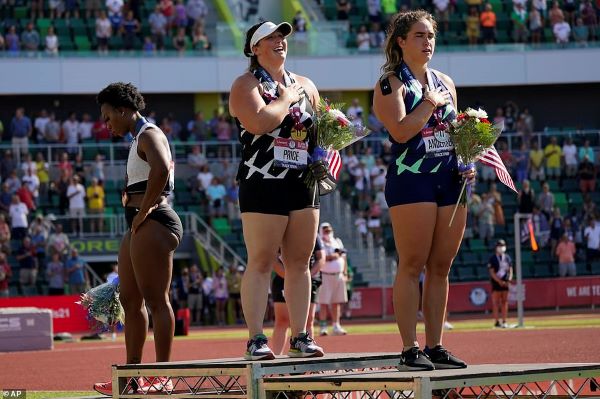 Gwendolyn Berry, left, looks away as DeAnna Price and Brooke Andersen stand for the national anthem after the finals of the women's hammer throw at the Olympic trials on Saturday AP

FOR DAILYMAIL.COM, ASSOCIATED PRESS and REUTERS

Hammer thrower Gwen Berry turned away from the American flag on Saturday while on the podium for a medal ceremony at the U.S. Olympic trials, saying it was ‘disrespectful’ to play the national anthem while she took a bronze medal.

While the anthem played at the trials in Eugene, Oregon, Berry placed her left hand on her hip and shuffled her feet. She took a quarter turn, so she was facing the stands, not the flag.

Toward the end, she plucked up her black T-shirt with the words ‘Activist Athlete’ emblazoned on the front, and draped it over her head.