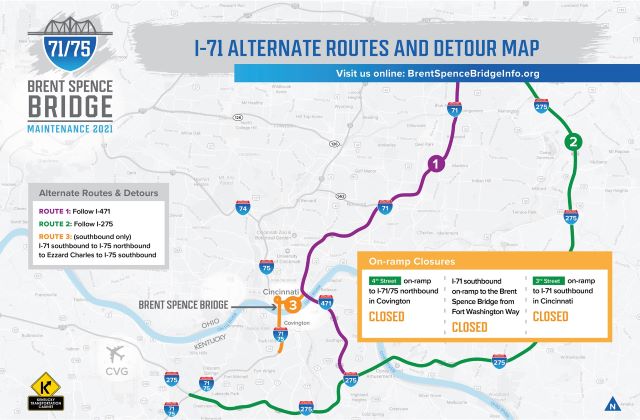 Access to I-71 and I-75 will be impacted over the weekend, weather permitting

Cory Wilson, Branch Manager for KYTC’s District 6 office said while crews are working over the weekend to put the new traffic pattern into place, significant delays are expected and drivers should seek an alternate route, when possible.

“Beginning Friday night, and continuing until early Sunday morning, travel will be
reduced to one lane northbound and access to I-75 and I-71 will be impacted,” he said.

Wilson also cautioned drivers about the upcoming traffic pattern noting that northbound drivers will need to plan their drive and know their route before they approach the bridge.

“Once the work this weekend is completed, the new travel pattern will be in place and changing lanes on the bridge will not be possible. Traffic in the far left lane will proceed to I-75 and traffic in the far right lane will proceed to I-71. The two center lanes on I-71/75 northbound across the bridge will be closed,” he said.

This traffic pattern is expected to remain in place through Sunday, Aug. 29, weather permitting.

“We are more than 50 percent complete with the maintenance project on the bridge,” said Bob Yeager, Chief District Engineer of KYTC’s District 6 office.

The project is expected to be completed by Nov. 15, 2021, weather permitting.