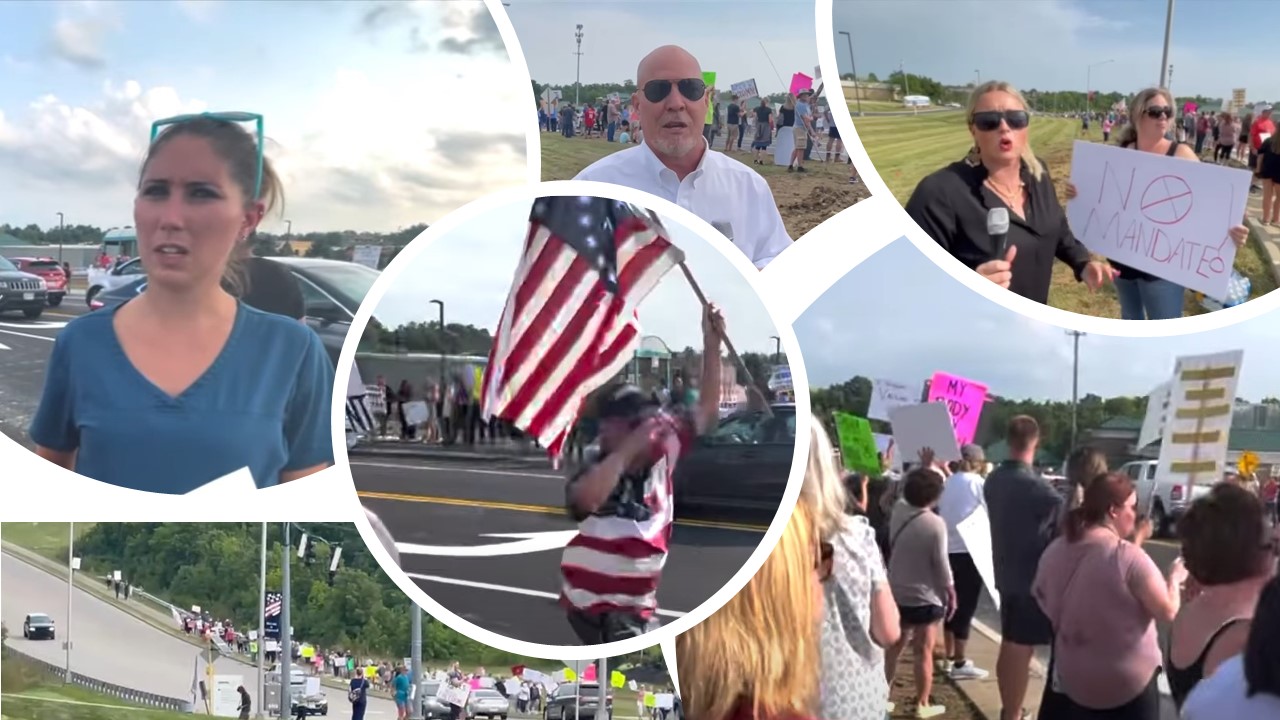 Hundreds of health care employees and their supporters lined the streets around the St. Elizabeth Healthcare facility in Edgewood Tuesday evening to protest the recently announced mandatory COVID-19 vaccination requirement for workers and volunteers.

Healthcare providers in the Greater Cincinnati region, including St. Elizabeth, Christ Hospital, TriHealth, Cincinnati Children’s Hospital, UC Health and Mercy Health announced the mandatory vaccination requirement as a condition for continued employment. The requirement will take effect as early as the next few weeks, or in the fall, depending on the individual healthcare providers’ deadline.

At least 11 health care systems from across Kentucky will also require employees to get vaccinated for COVID-19.

Healthcare workers have expressed frustration that for more than a year, they worked closely with COVID-patients for long hours and multiple shifts as the pandemic spread throughout the country, and the world. Often, they were separated from their families for long periods of times because of the fear of spreading the virus, at great risk to their own health.

There was no vaccine then, and treatment and diagnosis in the first few months amounted to little more than guesswork.

At that time, health care workers were viewed as heroes and lavished with praise not seen in this country since the accolades bestowed on the first responders in the 9/11 terrorist attacks.

Now, they have been told that if they want to continue to pursue the calling that brought them to health care, and drove them to serve patients at great personal risk in an unprecedented time, they must get a vaccine that was developed in less than a year.

Concerns of employees opposed to mandatory vaccination include the condensed timeline for development and emergency approval of the vaccine, a preference to rely on antibodies and natural immunity to fight the virus, a distrust of the government and health organizations and the infringement on autonomy and personal freedom.

While employees can request a religious or medical exemption, its uncertain how many of those will be approved. In many cases, medical exemptions will be reviewed by doctors whose employer is requiring the mandatory vaccination.

Bulldog Media and its founder, retired attorney Eric Deters, have received hundreds of emails and messages from health care workers, contractors, and others asking for assistance in fighting the mandatory vaccination requirement.

Deters Has introduced a plan (Click here to see video) to fight the mandatory requirement.

A team from Bulldog Media, including Deters, was on hand Tuesday to film the demonstration and speak to some of the protesters. While most were healthcare workers, others were there to show support and many motorists who drove past also honked their approval.

April is a lab assistant/phlebotomist at St. Elizabeth Healthcare with 12 years of experience in oncology/hematology and 18 years in the medical field. She explained why she got into medicine and why she resists the mandatory vaccine requirement.

“I really like to make a change and I like to make (patients) feel better,” she said. “I just always stand up for people and I want to make them better. If it’s just for five minutes during the day, I want them to know that someone is there for them.”

She is standing up for her biological autonomy and says it is clear, based on the crowd on demonstrators on hand at St. E, that she is not alone.

“We are standing up for what is right and that is ‘our choice,’ and right now I am proud to be in the medical field,” she said. “We are one big family. We are citizens of the United States of America, and we know that we still have a choice…but we have to do something now to make sure it stays that way.”

Candace Hatter works as a dental assistant, as a TNA in a nursing home, and a few days a week in the OR at St. E. She is preparing to start fertility treatments, but her specialist has so far not agreed to give her an exemption, so all three of her jobs could be at risk.

“I just think this is all crazy,” Hatter said. “You can’t force someone to take a vaccine that hasn’t been approved by the FDA. It’s my body and my choice.”

(Click on the video at the bottom of this story to watch the entire interview with April and click on the links below to see complete Bulldog Media coverage of the St. Elizabeth Edgewood demonstration, including the interview with Candace Hatter)

At Risk of Losing 3 Jobs Over Vaccine Mandate- Fertility Specialist Denies Exemption For Her.

Demonstration By St. Elizabeth Employees That Don’t Want To Take The Vaccine Mandated By Employer.

At this point there is no indication any of the health care providers are prepared to change their position regarding mandatory vaccination, but employees and their supporters say the fight will continue. Many are prepared to walk away from the jobs they love to defend their right to choose not to get the vaccine.

Deters said those who need help and are affected by these vaccine mandates should email eric@ericdeters.com or text 859-250-2527.