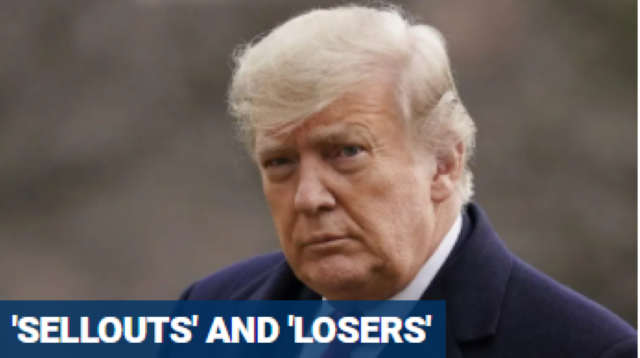 Former President Donald Trump is amping up his battle against “RINOs, sellouts, and known losers” who voted in favor of the infrastructure bill, calling on other Republicans to challenge them in primaries.

“Saving America starts by saving the GOP from RINOs, sellouts, and known losers! In the Senate, the ‘Disaster from Alaska,’ Lisa Murkowski (challenge accepted), must go. There is ‘almost’ nobody worse!” Trump said in a statement Saturday night to followers of the Save America PAC.

In this article:3 Notable Exceptions, calling on other Republicans to challenge them in primaries, Disaster from Alaska, Former President Donald Trump, Lisa Murkowski, RINOS, Sell-Outs Who Voted For Infrastructure, Trump Aims To Oust RINOs