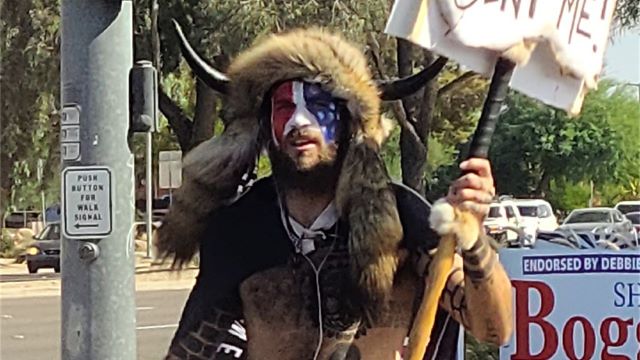 Jacob Chansley: ‘I Have No Excuses, It Was Indefensible’

Ten months ago, the bare-chested US Capitol rioter nicknamed the ‘QAnon Shaman’ became the face of the January 6 attack when he thundered into the Senate chamber in his horned fur hat and brandishing a spear, but at his sentencing on Wednesday there was no sign of the ferocious insurrectionist.

Instead, a humbled Jacob Chansley, 34, expressed remorse and spoke at length about his willingness to take responsibility for his actions – ‘like Gandhi’- before a federal judge sentenced him to 41 months in prison.

In this article:bare-chested US Capitol rioter, Capitol riots, I Have No Excuses, It Was Indefensible, Jacob Chansley, Joint Longest Sentence So Far, Qanon, QAnon Shaman, thundered into the Senate chamber in his horned fur hat and brandishing a spear