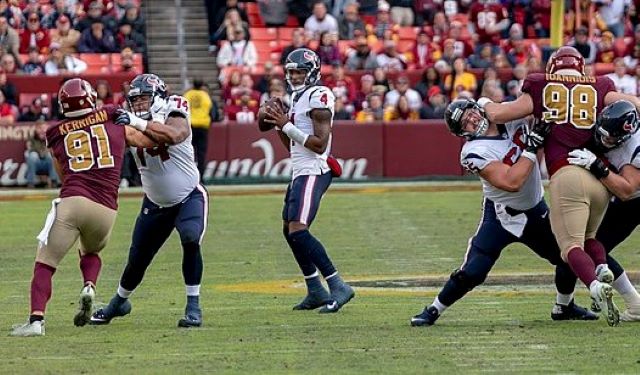 Deshaun Watson of the Cleveland Browns is suspended without pay for the first 11 games of the 2022 regular season and fined $5 million for violations of the NFL’s Personal Conduct Policy, it was announced today. In addition, Watson will promptly undergo a professional evaluation by behavioral experts and will follow their treatment program.

The announcement comes after an agreement reached by the NFL and the NFLPA and concludes the disciplinary process.

Watson’s fine and contributions from the NFL and the Browns of $1 million each will create a fund of $7 million. This fund will support the work of non-profit organizations across the country that educate young people on healthy relationships, promote education and prevention of sexual misconduct and assault, support survivors, and related causes.

“Deshaun has committed to doing the hard work on himself that is necessary for his return to the NFL,” Commissioner Roger Goodell stated. “This settlement requires compliance with a professional evaluation and treatment plan, a significant fine, and a more substantial suspension. We are grateful to Judge Robinson and Peter Harvey for their efforts in addressing these matters, which laid the foundation for reaching this conclusion.”

On August 1, Judge Sue L. Robinson, the independent Disciplinary Officer jointly appointed by the NFL and NFLPA, found that Watson violated the NFL’s Personal Conduct Policy on multiple occasions. She suspended him for six games.

The CBA affords the NFL or NFLPA the right to appeal the discipline imposed by the Disciplinary Officer. Today’s announcement concludes the process and there will be no designee ruling or additional legal steps.

Watson’s suspension will take effect at the final roster cutdown and he will be eligible for reinstatement on November 28.