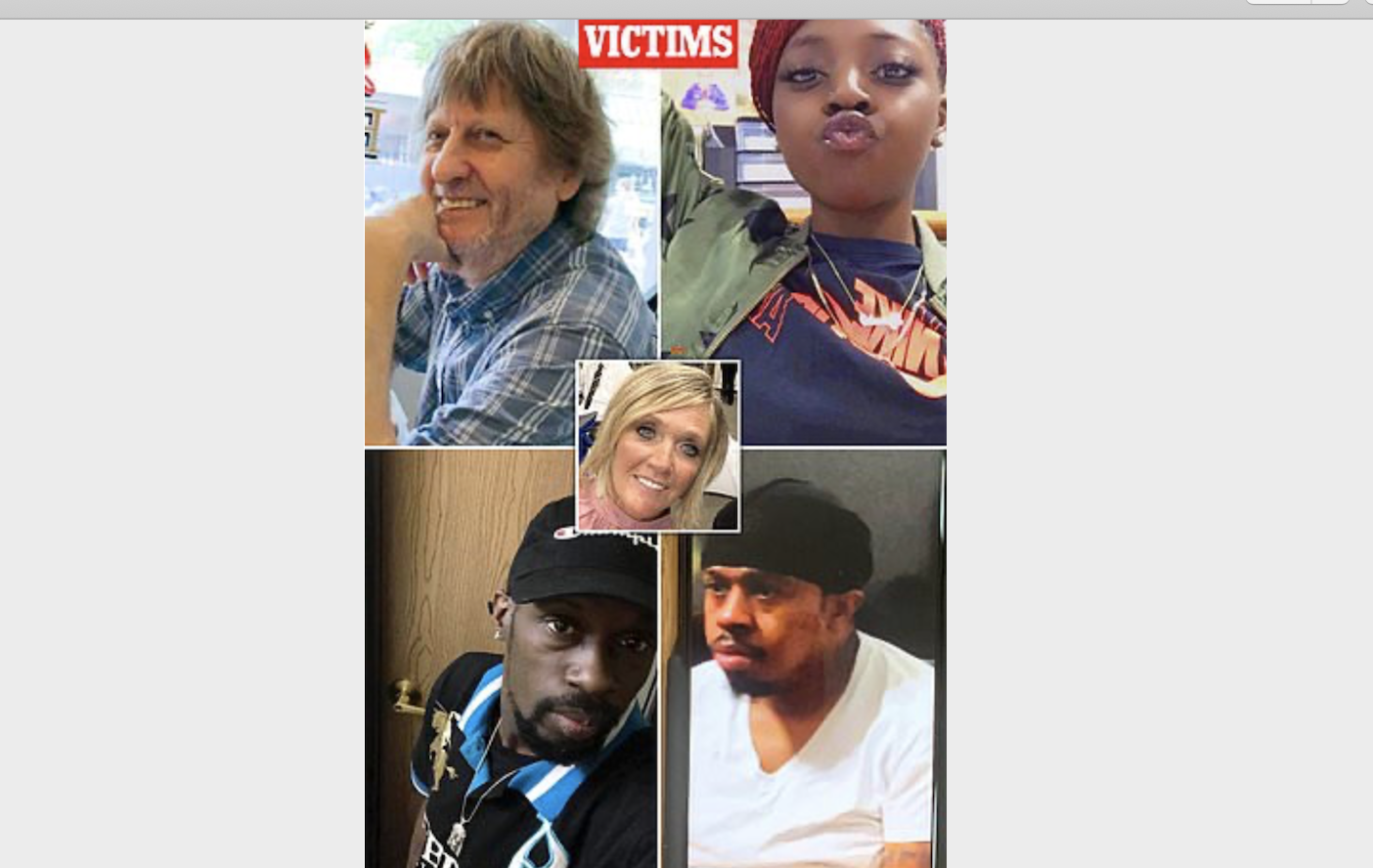 By ALEX HAMMER and JENNIFER SMITH, CHIEF REPORTER and EMMA JAMES IN VIRGINIA FOR DAILYMAIL.COM

Police have identified five of the six victims killed during a mass shooting at a Virginia Walmart Tuesday, hours after naming the disgruntled manager who carried out the killing.

The sixth deceased victim was a 16-year-old boy, the city said. His name and photo were withheld due to his age. The victims range in age from 16 to 70.ADVERTISEMENT

Earlier in the day, the city identified the shooter as 31-year-old store manager Andre Bing, who opened fire in the breakroom of the Walmart in Sam’s Circuit, Chesapeake, at 10.12pm.

A total of 14 employees had been gathered there for a pre-shift meeting, police said, with local outlets reporting Bing had a list of the names of people he wished to target. It is not yet clear if any of the victims were on the list reportedly found by authorities on Bing’s person.

Police have identified five of the six victims killed during a mass shooting at a Virginia Walmart Tuesday, hours after naming the disgruntled manager who carried out the killing. The sixth deceased victim was a 16-year-old boy, the city said. His name and photo were withheld due to his age. The victims range in age from 16 to 70

The release naming the victims said: ‘The City of Chesapeake has always been known as the ‘City That Cares’ and now, more than ever, we know our City will show up and care for those who need it most.’

Andre Bing, 31, is the shooter from yesterday’s Walmart rampage. Police released this photo on Wednesday. They have not confirmed whether he had a criminal record

‘Please join us in praying for the family and friends of these community members who we have lost.’

Tributes to the victims from mourning family members started to surface Wednesday as well.

The mother of slain staffer Lorenzo Gamble, 43, lamented how her son, who worked at the store for 15 years and was set to transfer to another location, had left behind a family of his own.

‘My quiet baby Lorenzo is gone,’ the mourning mom wrote in a post to Facebook Wednesday morning.

‘He worked there for 15 years, he was going transfer to Grassfield.

‘Now his sons is loss [sic] without him.’

‘Until we see each other again my angel,’ a caption for the tribute read.

The mother of Brian Pendleton, meanwhile, a janitor at the Walmart who would have turned 39 next week, gave an emotional phone to ABC in which she hailed her son as selfless, and someone who would give you the shirt off their back.

‘He had a real big heart,’ Michelle Johnson told the outlet. ‘Anybody that wanted to laugh, or just want company, he’d buy you lunch. He’d buy you anything in a minute.’

Pendleton worked at the Walmart for nearly 11 years as a custodian and ‘loved his job,’ according to his mother.

Tyneka Johnson, meanwhile, a 22-year-old worker at the store, was remembered fondly by her family as ‘the nicest person, who never bothered anyone.’ Rashawnda Ruffin, her cousin, hared a tribute to her cousin Wednesday to Facebook

The mom went on to describe the horror she and her husband went through Tuesday when they received a phone call from a family friend notifying her that there had been a shooting at the store. They were soon notified that their son has sustain unspecified injuries and was being treated at nearby Norfolk General Hospital, where they quickly drove to see him.

‘We waited, and then the police came out with a nurse and they took us to a side room and that’s when they told us that he didn’t make it,’ an emotional Johnson said, reportedly holding back tears.

Tyneka Johnson,  meanwhile, a 22-year-old worker at the store, was remembered fondly by her family as ‘the nicest person, who never bothered anyone.’

Rashawnda Ruffin, her cousin, wrote in a post to Facebook: ‘Damn couss I’m sorry this happened to you so soon you had so many plans but I guess god had other plans. So this means no more phone calls? No more sending pictures of your tattoos and i pick them out?

‘I’m just lost of words it was nothing but laughs and jokes LONG LIVE TYNEKA.’

It is not clear if the other two victims, 70-year-old Blevins and the 16-year-old minor, were also workers at the store.

Aside from the six casualties, police said that an additional four people who had been in the breakroom at the time of shooting remained hospitalized Wednesday morning. At least six people in total were transported to hospitals for treatment. Bing’s body was discovered by cops in the breakroom along with the bodies of two of the victims.

Earlier in the day, the city identified the shooter as Bing, who Walmart brass in a statement revealed was an ‘overnight team lead’ and had been employed with the company since 2010.

Police said Bing had been ‘armed with one handgun and had multiple magazines on his person,’ with the mayhem culminating with the shooter killing himself before he could be apprehended by police.

Tyneka, 22, was the first to be identified of the six killed in Chesapeake last night At 10.10pm last night, the shooter opened fire in a break room of the store. It’s unclear if the rampage was contained to the break room or if he ventured into the store

Police raided the home of the suspect Wednesday morning. Their investigation is still ongoing.

Cops said that there were 50 people inside the store at the time of the shooting, likely finishing some last-minute Thanksgiving errands.

Bing opened fire in the breakroom at the back of the store. He shot ten people before killing himself.

When police searched his body, they found a list of names that contained the names of the colleagues he wished to target, according to local Virginia outlet WAVY, citing an anonymous source.

Two of the victims were found next to Bing in the breakroom when police arrived, and a third was found at the front of the store.

Three others were taken to the hospital, where they succumbed to their injuries.

Four people are still in the hospital with unspecified injuries.

Former colleagues today described Bing as ‘weird’ and revealed he was so paranoid about being watched by the government that he taped over the camera on his phone.

It remains unclear if he legally owned his handgun or the ‘multiple’ rounds of ammunition he brought with him. Police say he was dressed in ‘civilian’ clothing, and was not wearing any kind of protective vest.

‘Everyone called him weird. That was all anyone could say about Andre,’ Shaundrayia Reese, who previously worked with him, told The New York Times.

In this article:virginia Walmart murders