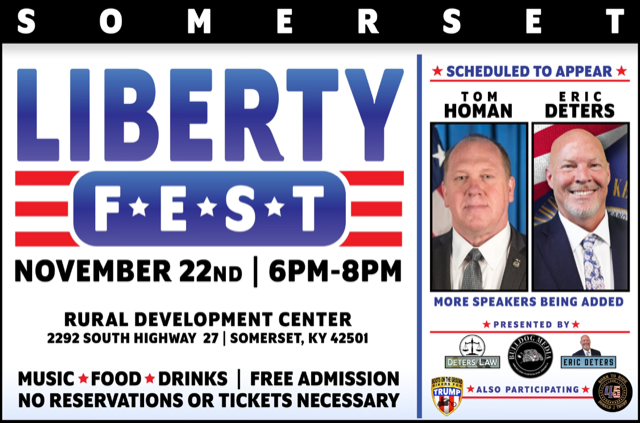 Deters has drawn thousands of people from all over the bluegrass state to his “Liberty Fests” and has brought in some heavy hitting national speakers like Donald Trump Jr., Eric Trump, Candace Owens, Kimberly Guilfoyle, Dinesh D’Souza, Newt Gingrich and others. At The ‘Liberty Fest’ in Somerset, Ky there was music, free food and drinks, free admission and two powerful speeches from Eric Deters and Former Immigration Customs and Enforcement Commander, Tom Homan.

Deters kicked off the evening with a personal introduction of himself as a fighter for the people, a non politician and a hardline Trump supporter from day one. Deters feels a kindred spirit with Donald Trump with the biased media and other powerful forces they’ve both have had to go up against. Deters talked about growing up on his family farm, working since he was 8 years old, putting up hay, stripping tobacco and taking care of horses. He graduated highschool at age 15 from Covington Latin, went to law school and was the youngest lawyer in the state of Kentucky for a time. In his 30 year legal career he has fought the largest and most powerful law firms in the Tri State and won. He has authored five books, his latest titled “The Butcher Of Pakistan”.. a story that depicts Deters’ 10 year legal battle for over 500 victims of severe malpractice involving unnecessary spine surgery by a fugitive spine surgeon, Dr. Mohammed Abubakar Atiq Durrani. Deters tipped off the US Attorney’s Office which led to Durrani’s arrest. Durrani ended up fleeing the country and traveled back to Pakistan. The legal battle has been going on for 10 years and Deters stays busy managing a law firm, a 2023 gubernatorial campaign and a media company. Deters encouraged those in attendance to visit his website detersforgovernor.com and vowed to change the attitude of government by leading the Kentucky government by example, working for the people, reminding all government employees that they’re employed by the people. Deters’ campaign slogan is “Less Government More Freedom.” Deters regularly and publicly gives out his personal cell phone number to all Kentucky constituents and encourages everyone with any questions or issues to call or text him directly and promises to respond within 24 hours.

Deters introduced Tom Homan, Former Director of ICE who Donald Trump appointed in 2016. Homan came out of the gate pissed off and unapologetic. Homan, like Deters, calls it like he sees it and doesn’t worry about hurting anyone’s feelings. Homan went on to explain why he was pissed off. In his time as Border Boss illegal immigration was cut down by 83%. He told heart wrenching stories about 19 people who died in 175 degree heat while locked in the back of a semi, women and children being raped, immigrants who drowned, were murdered and more. He reminded attendees that on day one the Biden Administration set out to undo everything that he and thousands of honest hardworking border patrol officers had done for this country all while being accused of being racist and inhumane. He said “Yeah, I’m pissed off, We saved lives while I was in charge. Border Security saves lives! We had 83% less women and children raped, 83% less murders, 83% less drugs who are killing Americans! Yeah, I’m pissed off” Mr. Homan was emotional and his patriotism and love for this country was on full display. He said that his wife is tired of him being pissed off and said he needs to go back to work. He said he plans on it when Donald Trump becomes President in 2024. In one of his final statements met with thunderous applause, Homan said, “We fixed it one time, we’ll fix it again”