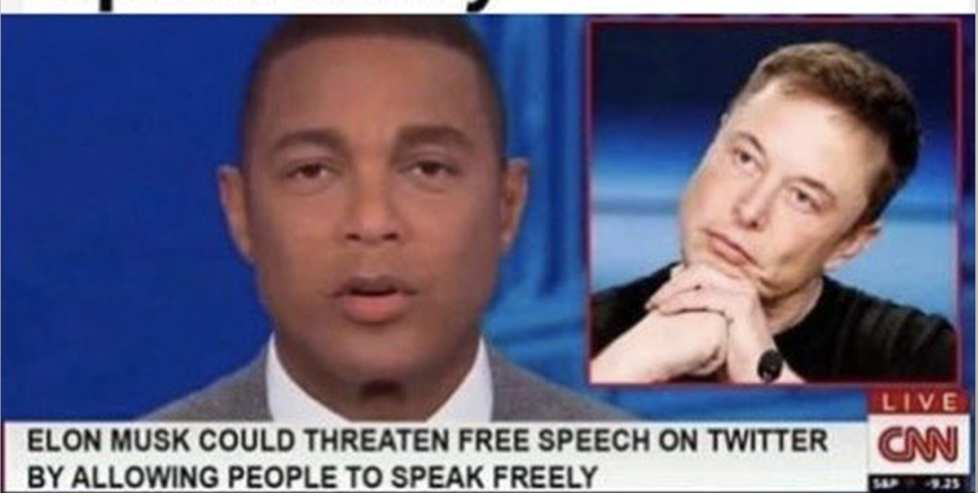 Elon Musk caused a flurry on social media after the tech CEO posted a meme mocking CNN’s concerns about free speech on Twitter.

Musk posted a picture of CNN’s Don Lemon on Monday, alongside a satirical chyron that read “Elon Musk could threaten free speech on Twitter by allowing people to speak freely.”

Some Twitter users were confused about whether the meme was from an actual CNN broadcast. The image is originally from Geniuses Times, a satirical website that describes itself as “the most reliable source of fake news in the planet.”

Ronald Brownstein, a senior editor at The Atlantic, claimed that Musk was simply repackaging hate speech as free speech to empower extremism on the far right.

“Simple equation: Musk repackages hate speech racism anti-semitism homophobia and far-right intimidation as ‘free speech’ & any effort to hold him accountable for injecting it into US society as the ‘woke mob.’ On both ends, same goal: amplifying & empowering far-right extremists,” he tweeted.

Meanwhile, The Jewish Voice, a news and opinion site dedicated to promoting classical Judaism, asserted that Don Lemon’s continued presence on CNN would ensure most Americans would click off the channel.

“How ridiculous can it get?” author James Arthur Ray chimed in.

“I’ve always said what I want and always will speak from heart,” actor and comedian Tommy Chong tweeted.

Morten Øverbye, a tech entrepreneur and former managing editor of CNN Norway, slammed Musk for appearing to float his own rule to label parody.

“Just 17 days ago, Musk made up a new rule saying accounts engaged in parody must include ‘parody’ in their name,” he said.

Musk said on November 10 that accounts engaged in parody must include the word “parody” in their actual name, not just their bio.

Musk’s criticism of CNN and Lemon comes days after the network anchor attempted to fact-check the Twitter owner, claiming that context was needed after Musk posted a tweet calling the “Hands up, don’t shoot” myth “made up.”