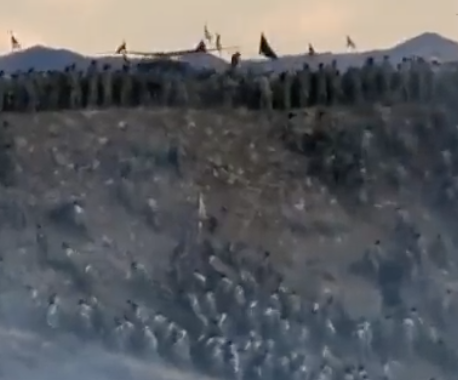 Soldiers and veterans say the Army’s investigation of a now-defunct recruiting program left them with a criminal record even though they were never charged.

About 8,000 soldiers with the Army’s 4th Infantry Division were accidentally tear-gassed during a physical morale event that was held the day before Thanksgiving.

The soldiers, participating in a physical morale event which saw them attempting to scale obstacles, run up hills, and crawl through trenches, were exposed to the tear gas without prior knowledge the chemicals would be used during the event, according to a report from Military.com Tuesday.

Leaders with the division, based at Fort Carson, Colorado, took the unusual step of marking the boundary of the course with tear gas. However, soldiers participating in the event were not warned and did not have any protective gear, such as gas masks, when the gas drifted with the wind and settled on the soldiers on the course.

“The purpose of this event was to build unit cohesion. Leaders at echelon participated in this event with Soldiers,” Fort Carson spokesperson Dee McNutt said in a statement to Military.com. “The limited use of CS [gas] was not intended to interfere with the formations but to deter participants from leaving the course.”

Video provided to the popular social media page “U.S. Army WTF! Moments” showed soldiers covering their faces as the gas drifted onto the course just as they were attempting to climb out of a trench and scale a nearby hill.

The morale event was intended to pay homage to the Vietnam War Battle of Dak To. The 4th Infantry Division participated in the battle, which saw 361 soldiers killed, though the Americans and South Vietnamese emerged victorious.

Sgt. Major Don Durgin, who participated in the event, told the Colorado Spring Gazette that morale events are meant to enhance teamwork and give soldiers an appreciation for history.

“It’s bringing the entire team together with one objective to build comradery and trust in the organization,” Durgin said.

Such physical morale events have become commonplace at Fort Carson, with the division participating in a similar event last year and another in May honoring the unit’s actions on Utah Beach during World War II.

“These events are meant to have aspects of the unknown, replicating historical combat events in previous battles,” McNutt said.

However, the use of the gas without informing the participants was an unusual step. Army guidance on the use of tear warns against exposing soldiers wearing contact lenses when exposed to the gas, which can get trapped between the lens and eyes and cause severe pain. Pregnant soldiers are also warned not to be exposed to tear gas, which can lead to an increased risk of miscarriage.

Fort Carson did not immediately respond to a Fox News request for comment on the event and if there were any injuries.