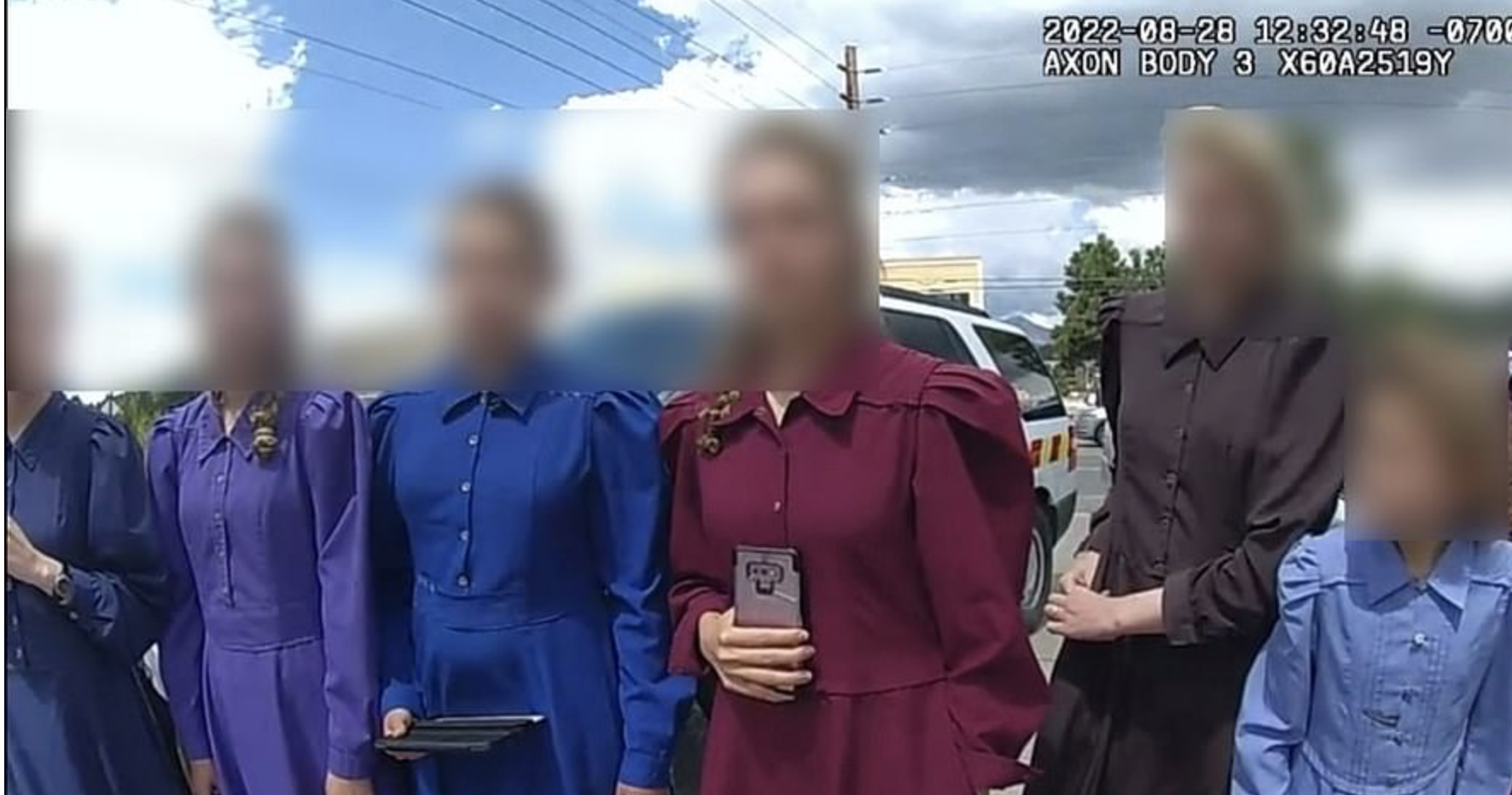 By KEITH GRIFFITH FOR DAILYMAIL.COM

Samuel Rappylee Bateman, 46, is accused by witnesses of ‘marrying’ up to 20 women and girls as young as nine, including his own daughter, according to an FBI affidavit

An Arizona polygamist cult leader had 20 wives aged as young as nine, married his own daughter, and drove his spouses around in a trailer with a bucket for a toilet, it is claimed.

A new FBI affidavit has revealed shocking allegations against Bentley-driving Samuel Rappylee Bateman, 46, who was arrested in Arizona earlier this year.

Samuel Rappylee Bateman, 46, is accused by witnesses of ‘marrying’ up to 20 women and girls as young as nine, including his own daughter, according to the affidavit filed on Friday, the Salt Lake Tribunereported.

He has been in federal custody on obstruction charges since his September arrest, which unfolded after Bateman was pulled over by cops while transporting underage girls inside a squalid trailer furnished with a couch and a bucket for a toilet.

Bateman leads a splinter group of the radical Mormon offshoot Fundamentalist Church of Jesus Christ of Latter-Day Saints, or FLDS — but Bateman is apparently so extreme that he has been denounced even by former FLDS leader Warren Jeffs, a convicted child rapist.

FBI Agent Dawn A. Martin, citing witness statements, writes in the filing that Bateman ‘began to proclaim he was a prophet’ and declared his intention to marry his own teenage daughter in 2019.

Women and girls are seen during an August 28 traffic stop in northern Arizona, where police say Bateman was hauling three girls, between the ages of 11 and 14, in a box trailer behind his SUV 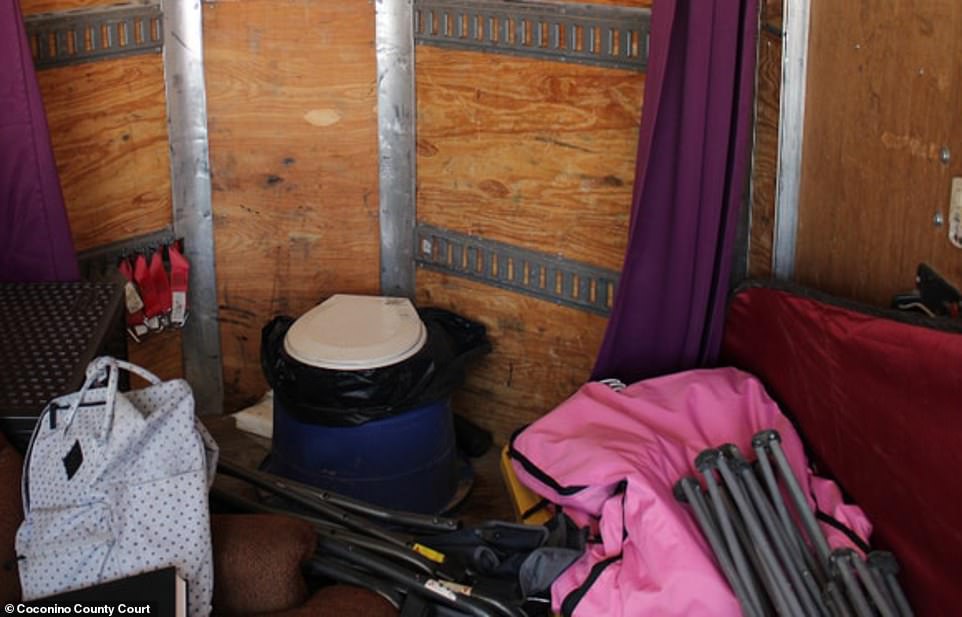 The squalid trailer was furnished with a couch, camper chairs, and a toilet made from a bucket

Evidence cited in the affidavit includes recordings of Bateman himself, speaking to a couple in Colorado City, Arizona, who do outreach to the polygamy community there and are filming a documentary.

In one example cited in the document, Bateman told the couple that ‘Heavenly Father’ had instructed him in early November 2021 to ‘give the most precious thing he has, his girls’ virtue,’ to three of his adult male followers.

Bateman then allegedly watched as the three men had sex with his daughters, one of whom was just 12, according to the affidavit.

Bateman allegedly commented that the girls had ‘sacrificed their virtue for the Lord,’ and went on to say: ‘God will fix their bodies and put the membrane back in their body. I’ve never had more confidence in doing his will. It’s all out of love.’

The affidavit further alleges that in late 2020, Bateman drove to the Colorado City couple’s home ‘in a large SUV packed with women and girls,’ where he ‘introduced everyone as his wives.’

The youngest of the so-called ‘wives’ was a girl born in 2011, Agent Martin wrote, meaning the girl would have been nine at the oldest.

The affidavit also notes that Bateman owned two Bentleys, though it seems his ‘wives’ traveled in less style.

Bateman’s initial encounter with the law came in August, when he was pulled over by a state trooper in northern Arizona towing a box trailer ‘full of people including children,’ according to AZFamily.com.

The trooper saw ‘children’s small fingers moving in the gap of the rear trailer door’ as he pulled up behind the trailer, according to a police statement. 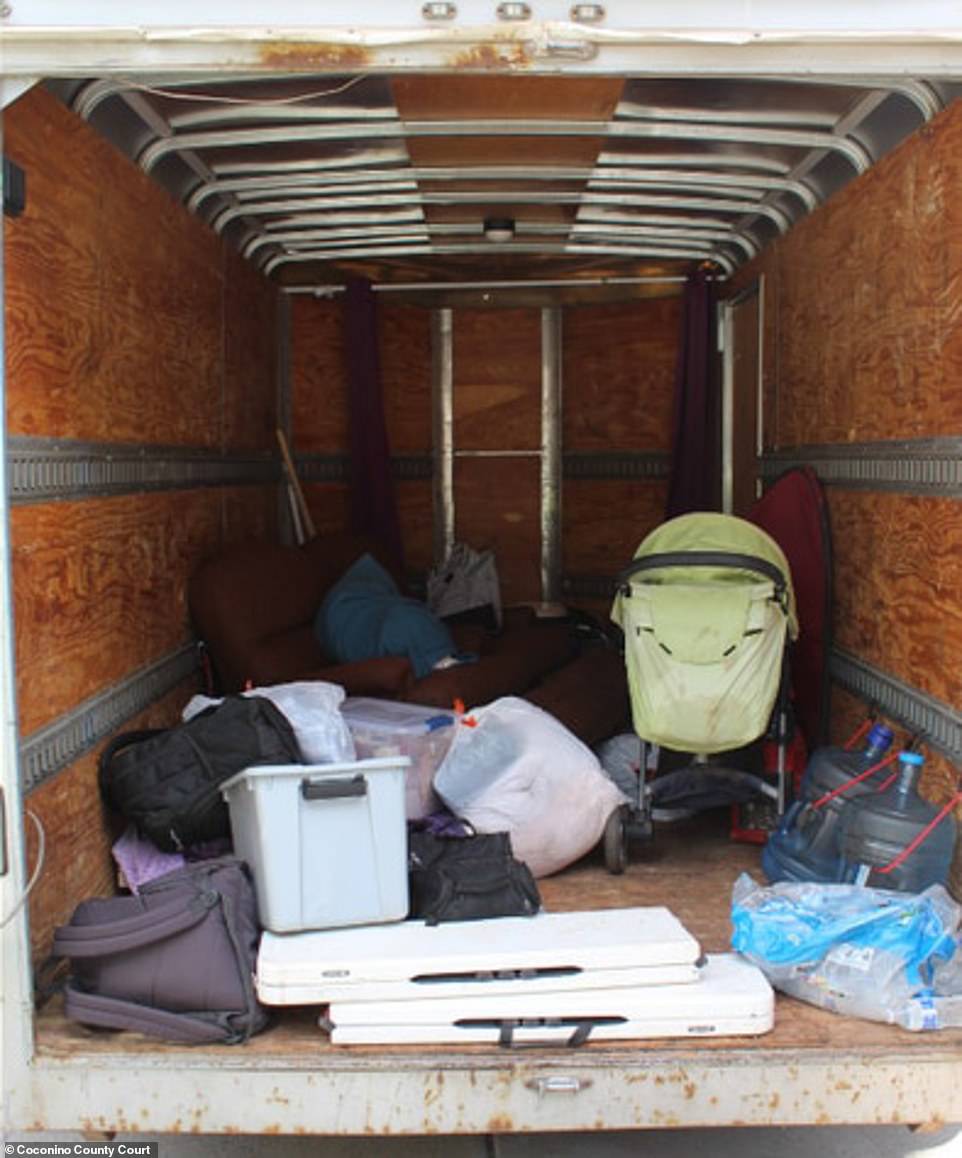 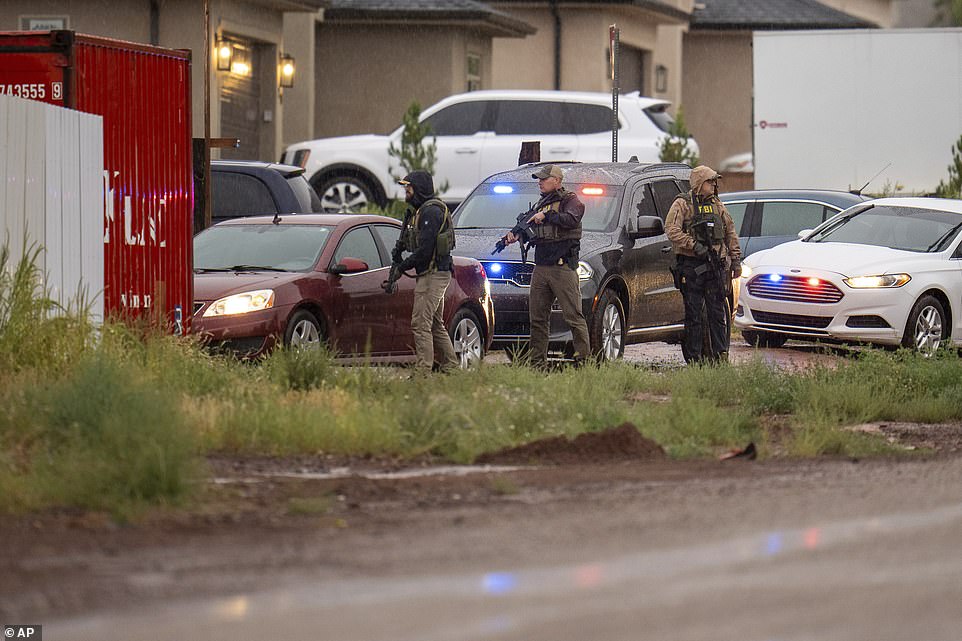 Police said there were three girls in the trailer, all between the ages of 11 and 14 years old, along with a couch, camper chairs, and a toilet made from a bucket. With Bateman in the SUV towing the trailer were two women and two girls under the age of 15.

Bateman was later arrested and charged locally with three counts of child abuse.

Federal prosecutors say that while he was being held in the Coconino County Jail in Flagstaff on those local charged, he talked to his supporters in Colorado City and instructed them to delete communications sent through the encrypted messaging app Signal, and demanded all women and girls obtain passports.

Bateman posted bond on the state charges, but weeks later he was hit with a federal indictment charging him with three counts of destroying or attempting to destroy records, and tampering with criminal proceedings, in reference to his instructions to his followers.

He pleaded not guilty in U.S. Magistrate Court in Flagstaff

Federal prosecutor Patrick Schneider said in September that the state child welfare agency had removed children from Bateman’s home in Colorado City, where the FBI had recently served a search warrant.

Bateman has not been charged with sex crimes against children, though the new FBI affidavit said the FBI has probable cause to believe he and others transported minors between Arizona, Utah, Nevada and Nebraska to engage in illicit sexual conduct between May 2020 and November 2021. 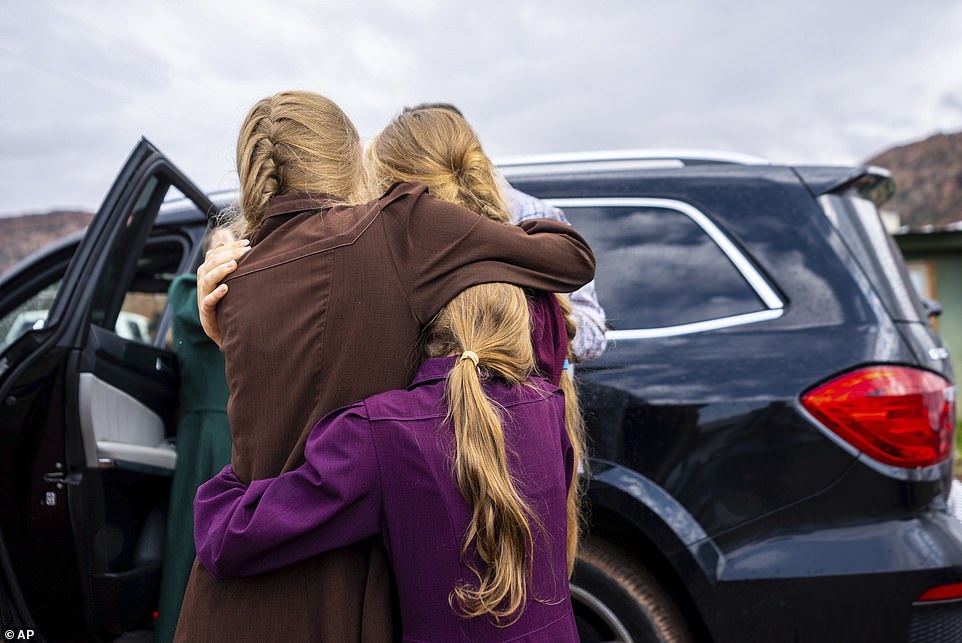 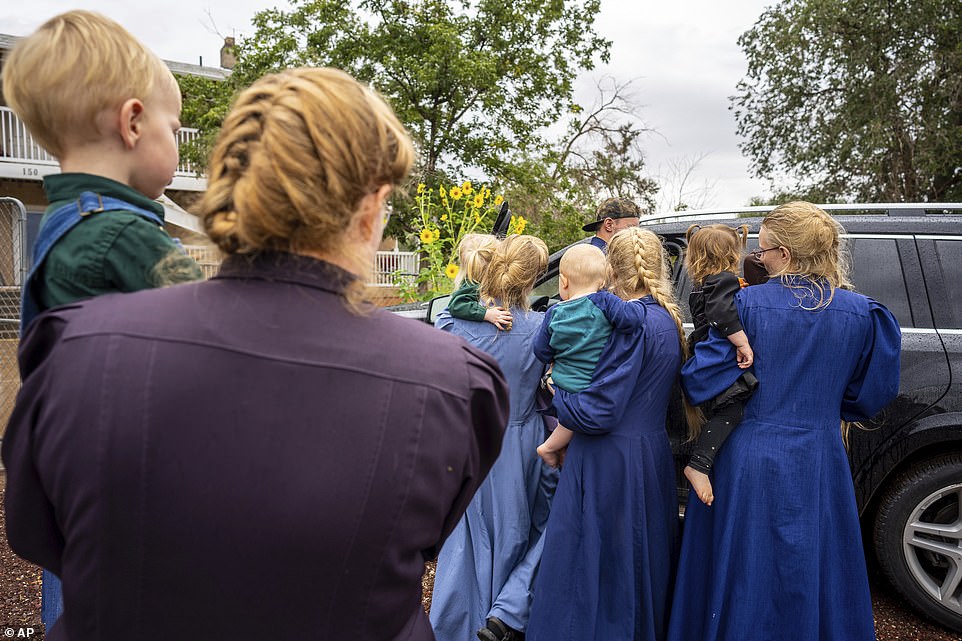 Family and followers of Samuel Bateman gather around as he calls from police custody following his arrest in Colorado City, Arizona on September 13

Bateman was a former member of the Fundamentalist Church of Jesus Christ of Latter-Day Saints, or FLDS, until he left in recent years and started his own small offshoot group, said Sam Brower, who has spent years investigating the group.

Bateman was once among the trusted followers of imprisoned leader Warren Jeffs, but Jeffs recently denounced Bateman in a written revelation sent to his followers from prison, Brower said.

Bateman’s group still practices plural marriage with a small following of fewer than 100 people, estimated Brower, who wrote a book on the FLDS and appeared in the recent Netflix series, ‘Keep Sweet: Pray and Obey.’

Bateman’s attorney, Adam Zickerman, in September cautioned against inferring the federal case was about religious persecution, though he didn’t specify Bateman’s faith or say if he practices polygamy. Zickerman said Bateman is not a danger to the community.

Schneider cited a pretrial services report in saying that Bateman had relationships with multiple women but also didn’t mention whether Bateman belonged to any polygamous groups.

‘Courts have a tremendous interest in protecting people who can´t protect themselves,’ she said.

Bateman listed a mailing address in Colorado City, where a patchwork of devout members of the polygamous FLDS, ex-church members and those who don´t practice the beliefs live. Both Colorado City and its sister community of Hildale, Utah, have seen significant cultural shifts in recent years.

The FLDS group run by imprisoned leader Jeffs has lost much of its control over the communities. Jeffs is serving a life sentence in a Texas prison for child sex abuse related to underage marriages.

Polygamy is a legacy of the early teachings of The Church of Jesus Christ of Latter-day Saints, but the mainstream church abandoned the practice in 1890 and now strictly prohibits it.