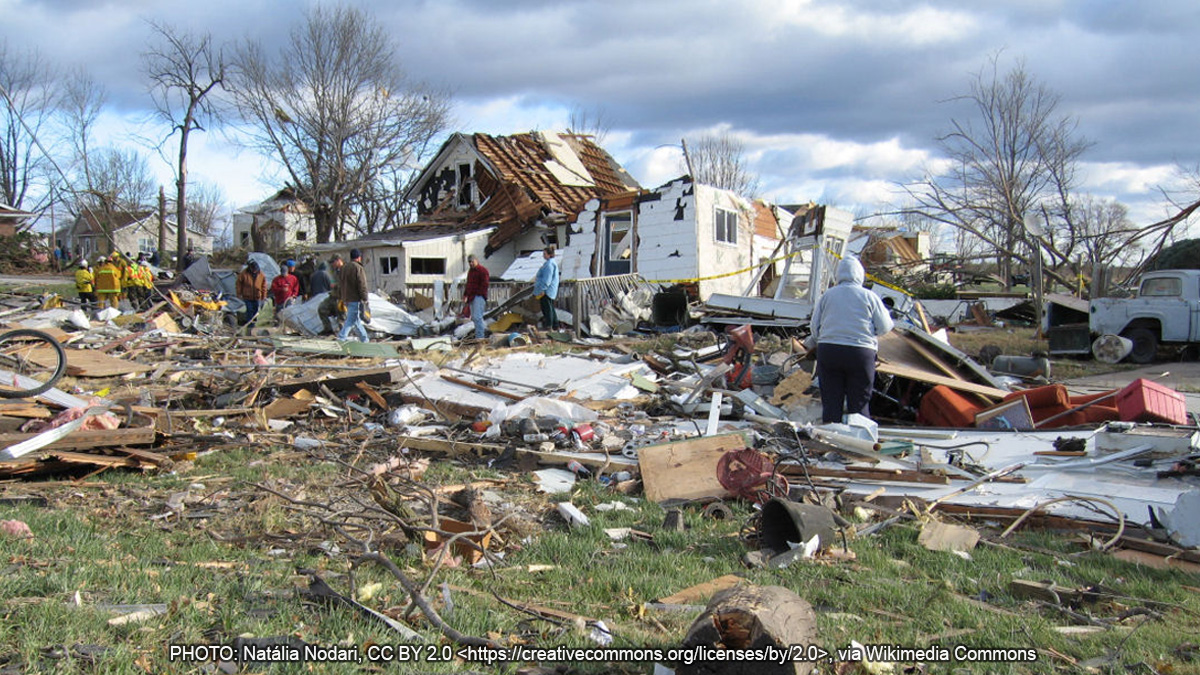 Gov. Andy Beshear launched a statewide donation program within a day of the outbreak. President Joe Biden approved a federal disaster declaration that same day, clearing the way for aid from the Federal Emergency Management Administration.

A year later, nearly $43 million of $52.3 million raised by the Team Western Kentucky Tornado Relief Fund has been committed to programs that include constructing new homes and providing money to farmers, state data show. About $9.4 million hasn’t yet been appropriated.

FEMA has distributed $15.8 million to 2,365 households across the area, according to data reviewed by WDRB.

In Mayfield, volunteers are spending hours renovating dozens of homes.

“We’d like to see a family with young kids and older kids moving in that part of what’s next for them,” said Allen Davidson, volunteer coordinator for the Mayfield-Graves County Long Term Recovery Group and also a pastor at Community Baptist Fellowship Church.

“Some are still in campers.”

Twenty-five homes will be given to 25 families, all tornado survivors, by Dec. 25 for a program called Home for the Holidays. It’s a Long Term Recovery Group project.

“Some of these people will be able to rent the property in order to own it,” said Rev. Joey Reed, vice chair of Long Term Recovery group.

While there is so much progress in the tornado-ravaged areas in Mayfield and in Dawson Springs, there’s also frustration.

“We did not quality for FEMA,” said Meredith Hyde, a survivor of the tornado that tore through Dawson Springs. “We applied like we were supposed to. We didn’t qualify because we had insurance.”

FEMA confirmed that, saying the program “provides financial and direct services to eligible individuals and households affected by a disaster who have uninsured or underinsured necessary expenses and serious needs.”

“IHP is not a substitute for insurance and cannot compensate for all losses caused by a disaster. It is intended to meet the disaster survivor’s basic needs and supplement disaster recovery efforts.”

FEMA said 6,043 households were not eligible for FEMA funds. Disaster survivors received an average of $6,100 for housing assistance and an average of about $3,000 for other needs.

The map below shows the 16 counties that FEMA helped tornado residents:

Sheila Rose, whose house was leveled in Dawson Springs, is now in a new home.

“FEMA was great. A lot of people talk bad about them,” she said. “It took a while. I complained a lot. I guess that’s the process. You have got to keep going, make sure you have the right papers and right people to help you, and I was very lucky to have that FEMA money helped pay for the house.”

She was thrown in the tornado, along with her family and granddaughter, 2-month-old Oaklynn Koon, who died.

The community has reached out to this family in big ways, making sure they stay safe in the future. Rose’s house has a safe room that doubles as a closet.

“Everything is bolted down to the concrete, so everything will stay there,” Rose said. “The whole place will be gone, but that will be there.”

And at Oaklynn’s family’s trailer in another part of town, people donated money to build an underground storm shelter. There has been so much community support. But some say it’s easier to get that than money from the state.

“Kentucky’s got $40 million that has been donated,” Hyde said. “Money has been donated to help the victims of the tornado, and we’re going on a year and we’ve not seen a dime.

Beshear said tens of millions of dollars went first to help pay for the funerals of the 81 people who died.

The state said there was no application process for people to get money from the Tornado Relief Fund. Data from FEMA, insurance and public record were used to determine who has damages from the storms and help was sent directly to those people.

The state pledged $12 million for Long Term Recovery Groups, but just more than $281,000 has been paid out so far. In a statement to WDRB News, the state laid out what survivors can do going forward:

“The Team WKY Tornado Relief Fund committed $12 million dollars to local long-term recovery groups (“LTRGs”) who continue to help survivors with unmet needs. Assistance from the relief fund is available in the areas of home repair, essential furniture and appliances, vehicle repair and replacement, terrain repair, mold and mildew remediation, and inspection and permit fees. If an individual has an unmet need in one of these areas, their local LTRG will determine eligibility for this assistance as well as potential availability of funding from other charitable sources. Individuals with unmet needs should contact their local LTRG for more information. A list of LTRG contacts is located at TeamWKYReliefFund.ky.gov. Every affected community has funds remaining.”

The state said the Graves County Grain Assistance required an application to allow farmers to report potential crop loss. That application has since closed with 164 farmers receiving a total of $3.9 million from the fund.

“We’ve got $5.8 million that’s been designated for this area, but they want us to apply for it $5,000, $6,000, $7,000 at a time,” Reed said. “Well, I understand the difficulties of working with government agencies. They’re not here and we’re not there, so the conversations are taking place at a distance. But I’m confident we’ll come to some sort of agreement.”

“Payments went out above, and on top of FEMA amounts that people received, we paid the deductible for everybody who was insured with their home or their rental unit who got hit,” Beshear said.

State data shows Kentucky pledged $16 million to build 300 homes with nonprofits. Only $1.6 million has been paid out so far.

“Now, we do have a pot of money working with our nonprofits that they pull from at the end,” Beshear said. “So we have a lot of those houses in construction. But the dollars will go out when they’re finished and the keys are handed over.”

Long Term Recovery organizers understand it’s a long process but said they’re getting donations to people who need it faster.

As building and renovating continues and lives continue to change with donations, some are hoping the state moves faster on payouts.

“We’re struggling to figure out where the money is, and it’s hard to not have some hard feelings about that,” Hyde said. “You haven’t come to my house. You haven’t seen our struggles. You haven’t seen us crying, because we’ve lost things we don’t know how we can replace.”

“We’re hoping we can get that money soon,” Reed said. “We just want them to trust the people who are doing the work here.”