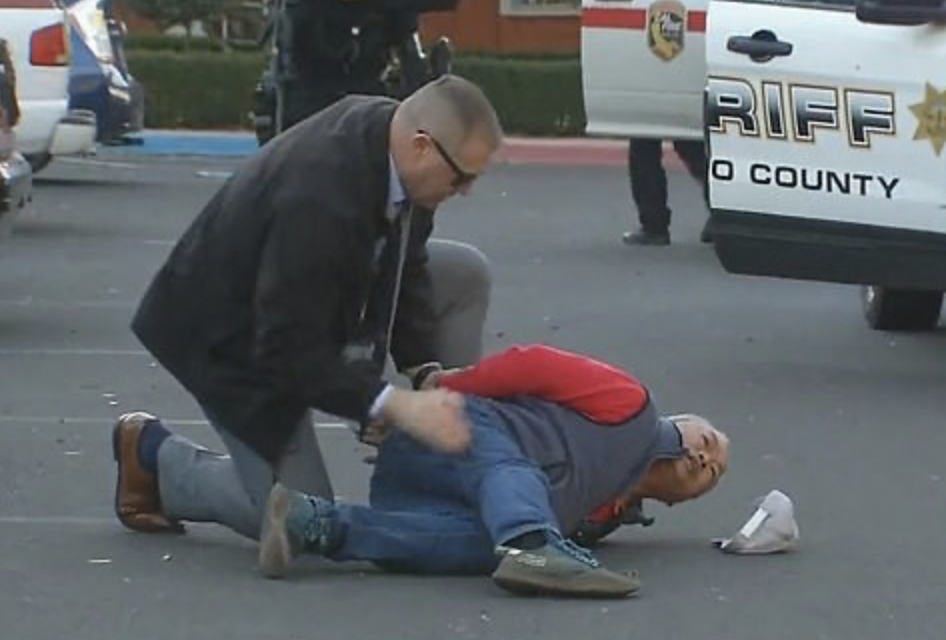 By HARRIET ALEXANDER FOR DAILYMAIL.COM

Chunli Zhao, 67, was taken into custody on Monday accused of murdering seven farm workers in the Half Moon Bay area

Chunli Zhao, who lived in Half Moon Bay, was arrested and is ‘fully cooperating’ with law enforcement, officials said.

The shootings took place at two separate locations in Half Moon Bay, with four shot at a facility run by Concord Farms, and three at Mountain Mushroom Farms two miles away. Officials are unsure which was attacked first.

Children were present at the time, because some of the workers lived on-site with their families.

ABC7 News confirmed that the suspect, who lived in Pescadero, had worked for decades at one of the mushroom farms where the shooting took place, and all victims were co-workers.

Dramatic footage from ABC News shows the moment Zhao was taken into custody, in the parking lot of the Half Moon sheriff’s office, at 4.40pm.

‘It’s a tragedy we hear about too often, but today it has hit home to Half Moon Bay.’ 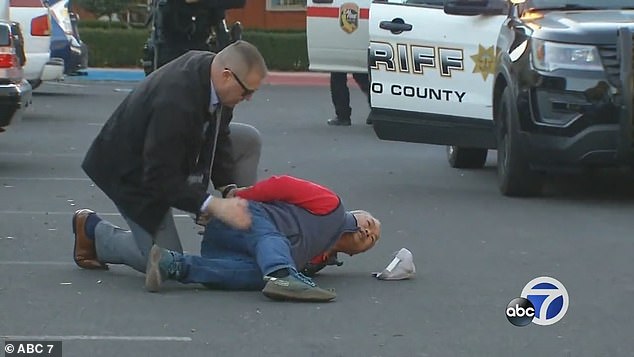 A suspect is now in custody in the Half Moon Bay shootings. Here’s the intense moment it happened – caught on video by our @abc7newsbayarea camera pic.twitter.com/1ZGcLh8Byz— Liz Kreutz (@ABCLiz) January 24, 2023

Corpus added: ‘We’re working with our district attorney’s office to interview the suspect.

‘He’s believed to be a worker. We don’t have the exact connection at the time – we are working to try and gather more information.’

Corpus said that the children were on the scene because school had finished.

‘For them to witness this is unthinkable,’ she said. 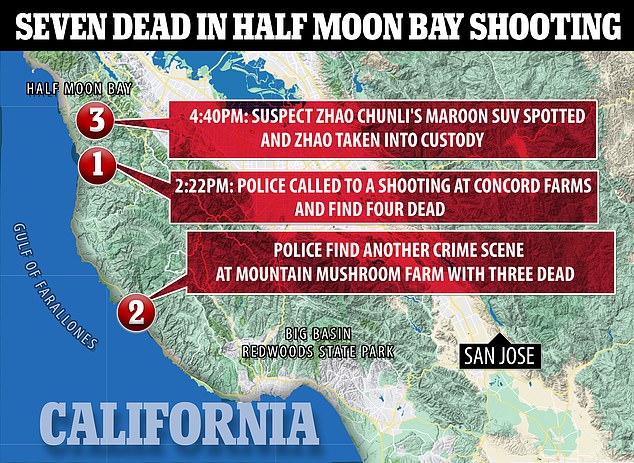 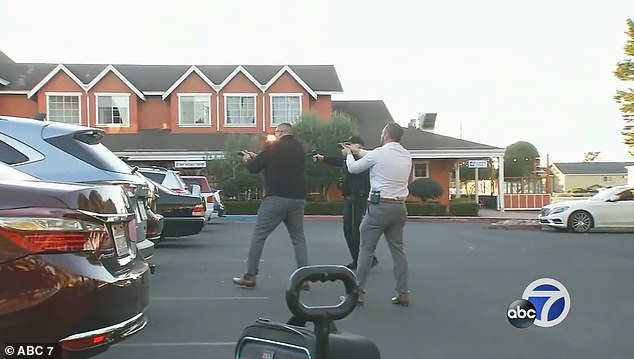 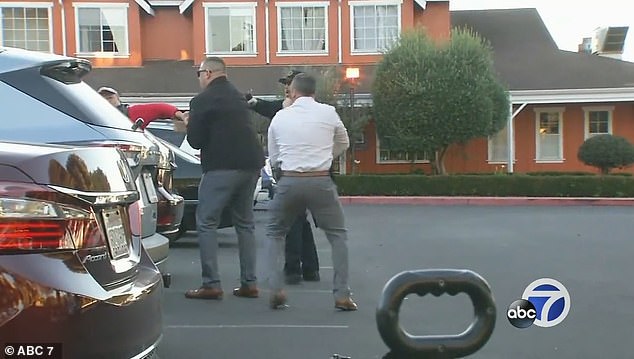 They grab Zhao by the hand, and wrestle him to the ground 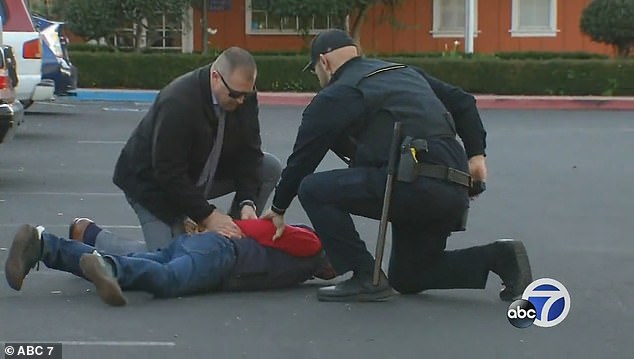 Zhao is seen being restrained and searched, before he is handcuffed and put in the police car 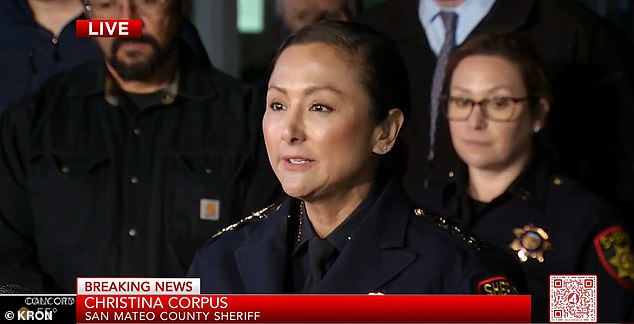 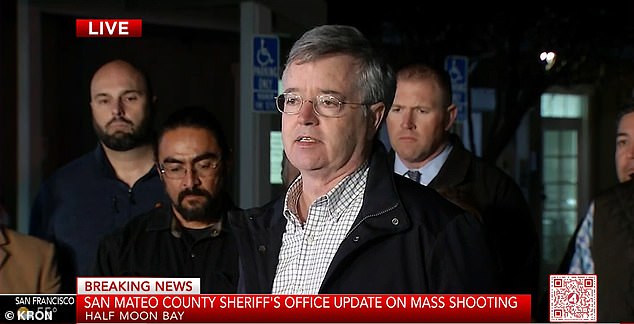 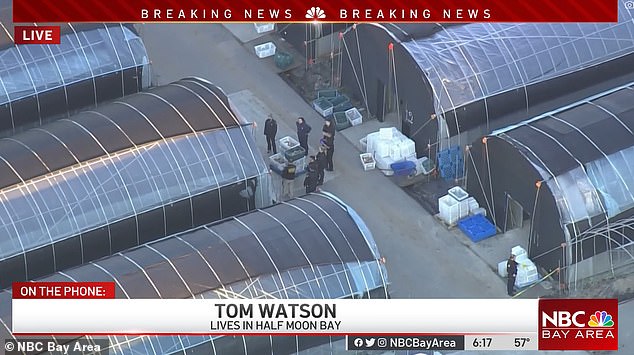 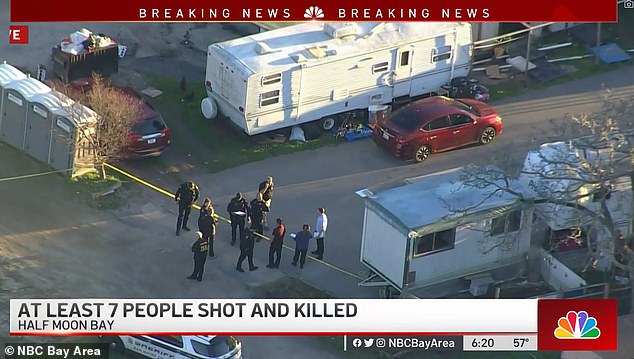 The first call was made to police at 2:22pm on Monday afternoon 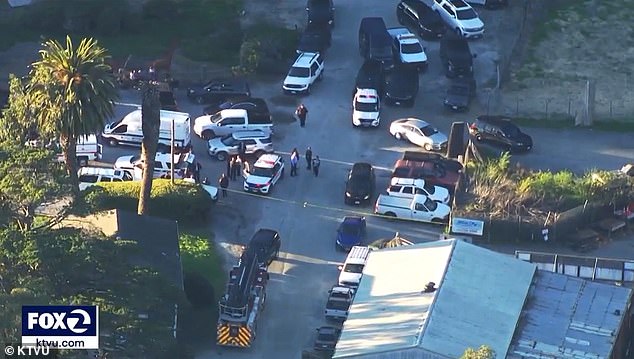 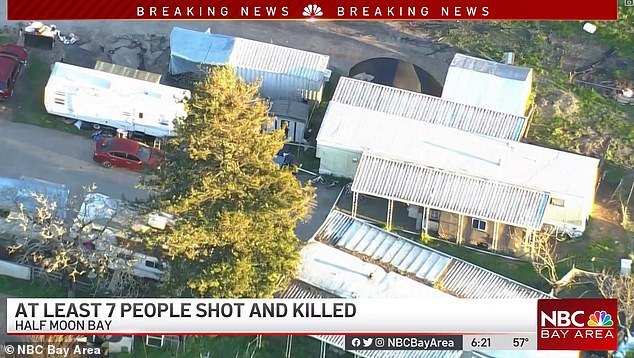 Zhao is believed to have worked at one of the sites for many years: police are confirming the details of his employmentPolice investigate site of mass shooting in Half Moon BayProgress: 0%0:00PreviousPlaySkipMuteCurrent Time0:00/Duration Time1:22FullscreenNeed Text

The sheriff’s office confirmed at 5pm that they had the suspect in custody.

‘There is no ongoing threat to the community at this time,’ they said in a tweet.

Half Moon Bay is a small community of 12,000 people in the Bay Area’s Peninsula. The city sits less than 30 miles outside of San Francisco.

Dave Pine, president of the San Mateo County Board of Supervisors, told a press conference: ‘There are simply too many guns in our country.

‘This has to change.

‘This is not an acceptable way for a modern society to operate.’

Pine and his colleagues urged local residents to take advantage of mental health support being offered by the community.

Gavin Newsom, the governor of California, tweeted: ‘At the hospital meeting with victims of a mass shooting when I get pulled away to be briefed about another shooting. This time in Half Moon Bay.